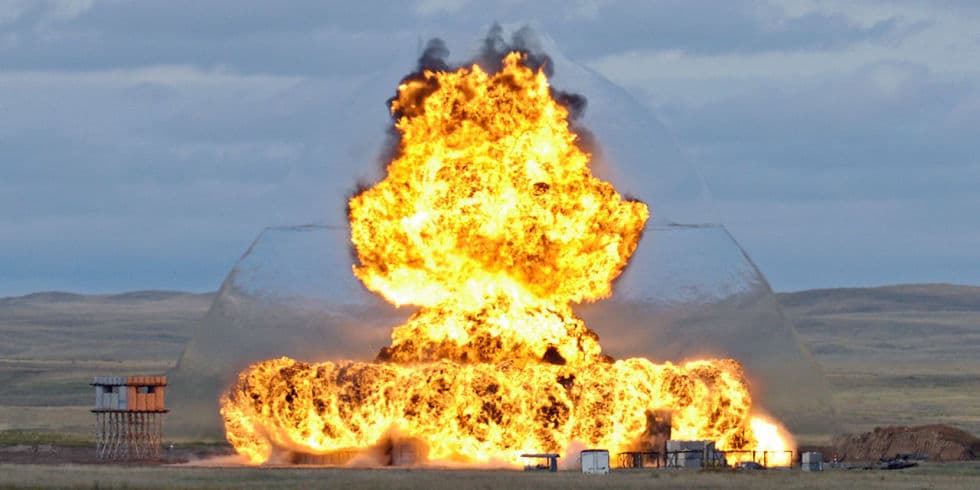 This image comes from Defense Research and Development Canada, and it depicts the moment when a shock wave takes off. Ultimately, these amazing features form when a wave is moving faster than the speed of sound, and they generally contain an amazing amount of energy. In fact, the main cause of damage from a detonation (like a bomb that is dropped during wartime) is often the supersonic blast that is associated with the blast.

They contain so much energy that some have suggested we use this phenomenon in space travel. Known as a pulse detonation engine (PDE), these devices would, theoretically, allow spacecrafts to travel using less power. Air Force chief scientist, Dr. Mark Lewis, asserts that the science is sound, but it is not clear whether or not the benefits would really make the technology a justifiable investment. "Honestly, the scientific jury is still out on PDE’s and their derivatives, but this is definitely a worthwhile area for future research."

Lewis continues by clarifying why, despite the face that the theory is sound as far as the basic science goes (meaning that they would work), scientists don't know that the added efficiency would really be a significant factor:

The thermodynamic cycle they use would indeed be more efficient than a standard jet engine cycle; a jet burns its fuel and adds its heat at a constant pressure (or nearly so) whereas a PDE adds heat at a constant volume – very similar to an automobile engine. It can be shown from fundamental principles that you get more useful work when you add heat at constant volume than at constant pressure...however, a PDE by its very nature would not be a constant burning process, rather an intermittent process (think of a series of detonations, one after the other). That could put extra stress on engine components, makes it difficult to harness the combustion effects for efficient propulsion, and can also be difficult to initiate.

That said, all plans to actually build one of these devices have floundered. The photo pictured here comes from the Experimental Proving Ground, a site that has been in operation since 1941.

See more amazing explosion images in the below video: