The Exoplanet Discovered That Originated From Another Galaxy 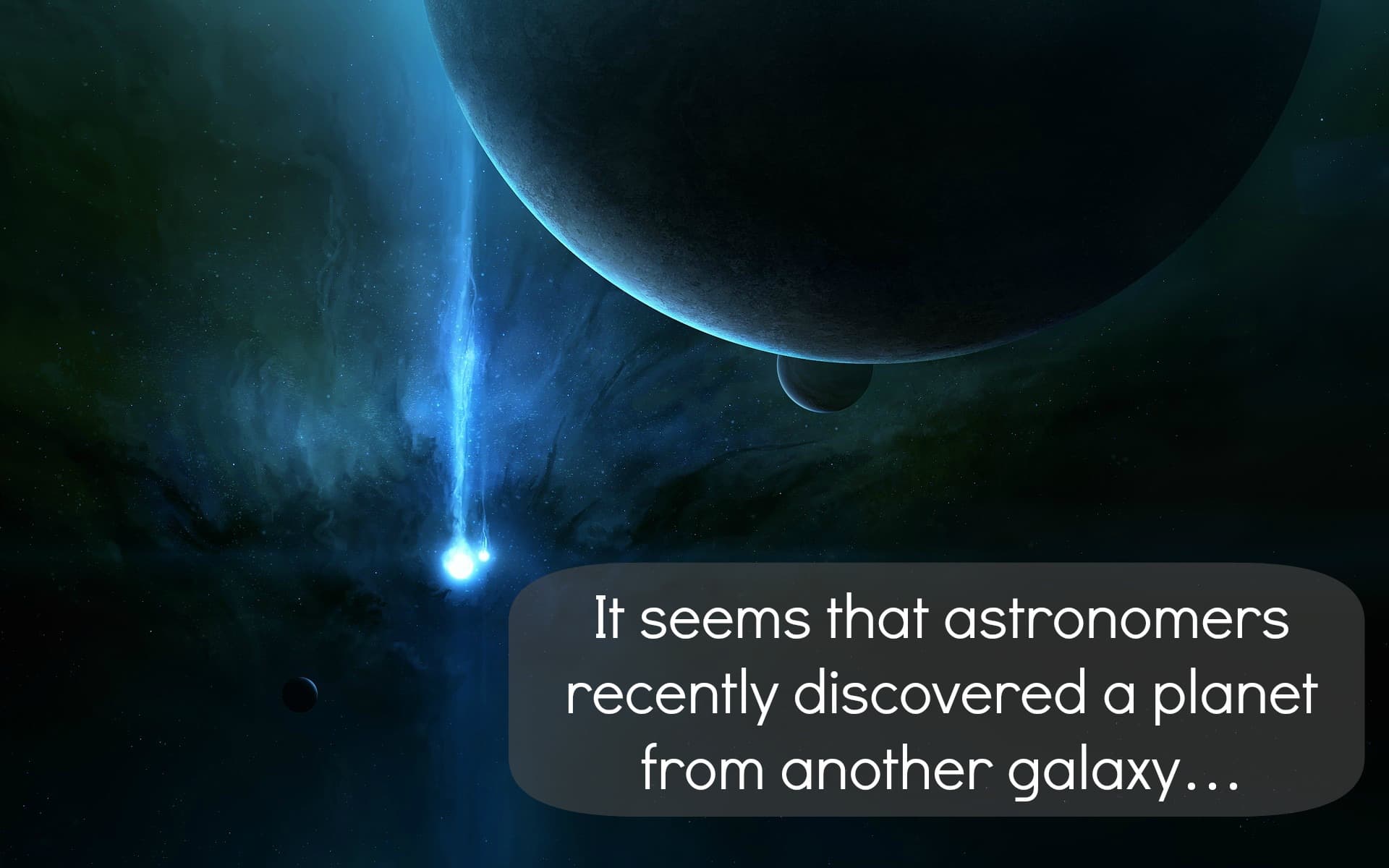 Ladies and Gentlemen, We have a Visitor:

"Some extrasolar planets truly are from out of this world" (and yes, this is a play on words) ...for the first time, astronomers have discovered a planet in the Milky Way that's believed to have come from another galaxy. The planet, dubbed HIP 13044 , is located about 2,000 light years from Earth in the constellation Fornax. The star in question is a part of a collection of stars called the Helmi stream, which likely originated in another galaxy from our own. They were ripped from a small satellite galaxy some 6 to 9  billion years ago.

HIP 13044 and other stars in the Helmi stream stand out in the solar neighborhood mostly because they have elongated orbits that take them about 42,000 light-years above and below the plane of the Milky Way's disk. Such orbits strongly suggest that the stars were once a part of a group that was torn from another smaller galaxy, causing their orbits to be stretched out by gravitational forces into a filament or stream, eventually fusing the smaller galaxy with our own. The stars motion has been monitored for many months, looking for telltale orbital wobbles that would indicate the presence of a tiny, unseen orbiting planet.

The Tough Life of an Orphan:

Being from another galaxy isn't the only thing that's unusual about the star the exoplanet orbits. Indeed, HIP 13044 has the lowest abundance of metals (only about 1% of our sun) of ANY known star discovered to have an orbiting planet. In fact, the vast majority of extrasolar planets that are currently known have been found to be orbiting stars with much higher metal concentrations. The leading theory of planet formation suggests that stars with high metal contents are those that form giant gas Jupiter-like planets. Metals (astronomers' term for any chemical elements heavier than hydrogen and helium) in the swirling disk around the vicinity of stars form tiny "seeds" that attract other matter and slowly grow into planets. So indeed, this exoplanet would be very much unlike our own home planet.

Another unusual aspect about this star is the existence of an orbiting planet at all! HIP 13044 is old enough to have exhausted its supply of the hydrogen neccesary for nuclear fusion, which signals  the red giant phase of stellar evolution. (Our own sun will experience this in about 5 billion years time) During this transformation, the star would have  ballooned in size, before contracting to a diameter about seven times larger than that of our sun. This phase is referred to as "the red horizontal branch," and no such star has been found with an orbiting planet, largely because it's typical for any close planets to be engulfed by the star during its expansion. In part, we don't see any surviving planets because the enhanced activity of old, evolved stars usually includes the presence of magnetically driven disturbances referred to as "starspots," which makes it more difficult to discern a stellar wobble.

For now, it seems that this planet has dodged a massive bullet, but it's not in the clear completely. It now orbits its parent star much closer to it than Mercury does to the sun. For this to be possible, the planet must have originally orbited its star at a much greater distance, possibly farther out than Venus or Earth is from the sun. In a few million years, when the star exhausts the remainder of the helium forged in its core, it will undergo a more rapid expansion and the planet is not expected to survive.