Ever Wonder How it Looks to Soar Above Earth? This is the Next Best Thing. 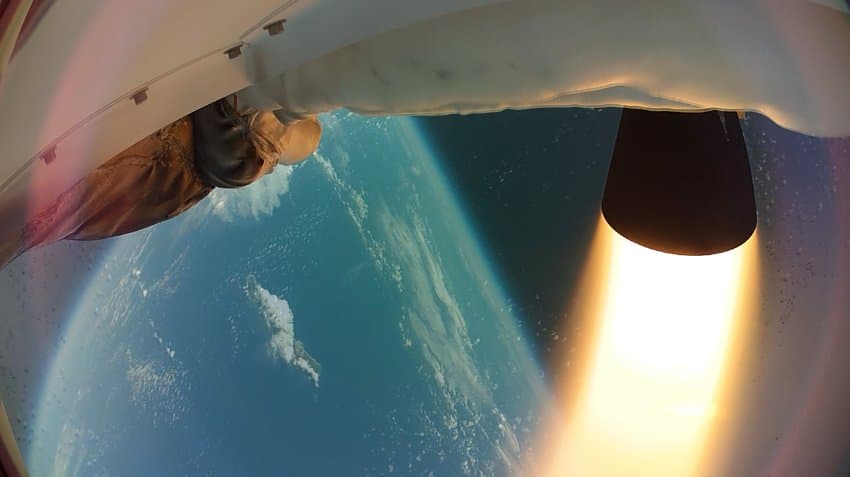 We've all seen those fantastically beautiful images taken a few miles above Earth's surface. From this vantage point, cities like London and Paris look like little blips on a radar—continuing to grow smaller and smaller as you soar higher above the water and the soil. Unfortunately, only a lucky few will ever see how our blue marble looks from beyond the boundary of commercial airspace . The rest of us are relegated to using pictures and/or our imaginations.

This high-definition footage—taken with a camera attached to NASA's Low Density Supersonic Decelerator during a test flight—is second only to seeing this spectacular view for yourself.

The Low Density Supersonic Decelerator (LDSD)—also known by the general public as the 'Flying Saucer' because of its circular shape—was built and tested for the purpose of simulating traveling to Mars. Impressively, after a 34 million cubic feet (10,363,200 cubic meter) balloon hoisted the craft 22 miles (36 km) above Hawaii, rocket thrusters were used to propel the vehicle to a height of 34 miles (55 km), in merely 71 seconds, effectively reaching  Mach 4.3 (or exceeding the speed of sound approximately four times over).

Over the course of its short journey, the test flight showed that the device could survive the harsh conditions it would face if it ever attempted to safely land on the Red Planet (keep in mind that there is a reason NASA called Curiosity's descent the 'seven minutes of terror'). However, it did experience one minor hiccup when it came to the actual landing part, as the parachute, which is supposed to work in conjunction with a multiple step vehicular braking system, didn't deploy properly.

The first step is the inflation of a giant doughnut that encircles the device, called the Supersonic Inflatable Aerodynamic Decelerator (SIAD), which is used to increase drag and slow the vessel down from  Mach 3.5 to about Mach 2—all the while, conserving the remainder of its rocket fuel for the final maneuvers prior to landing.

Then, comes the arguably most crucial thing, the deployment of the 100-foot-wide “ballute" (a balloon/parachute combination) used to slow the craft down to subsonic speeds: something that is far more tricky than you might imagine. Not only does the parachute's design need to be durable enough to withstand strenuous forces whilst travelling at supersonic speeds, but it also needs to be quite large if it's going to be effective on Mars: a planet with a tenuous, but appreciable atmosphere (thus its weakened atmospheric drag). Yet the heavier the overall load is, the more fuel the craft must be equipped with for the journey, which makes the situation a delicate balancing act.

The simulation showed just how true that is, as the SIAD passed the test with flying colors, while the parachute came close to disintegrating under the sheer force of the descent. Ian Clark, the principal investigator at NASA's "Jet Propulsion Laboratory," put it like this:

"The idea of taking 200 pounds of Kevlar and nylon and deploying it at 2,500 mph, 200 pounds that inflated would be the size of a small warehouse, is certainly a challenging endeavor. There's a lot of physics with this problem that we're now gaining new insights into that we've never had before."

Instead of being disparaged by the parachute's failure, Clark seems confident in improving the design, saying:

"A good test is one where there are no surprises but a great test is one where you are able to learn new things, and that is certainly what we have in this case." "Our test vehicle performed as advertised. The SIAD and ballute, which extracted the parachute, also performed beyond expectations. We also got significant insight into the fundamental physics of parachute inflation. We are literally re-writing the books on high-speed parachute operations, and we are doing it a year ahead of schedule."

We can only hope that when the time comes—if this design actually proves viable for a Mars mission—we get a similarly stunning video of the descent through the Martian atmosphere. Like project manager Mark Adler said, “If a picture is worth a thousand words, then a video is worth about a million."