Death from Above – Asteroids 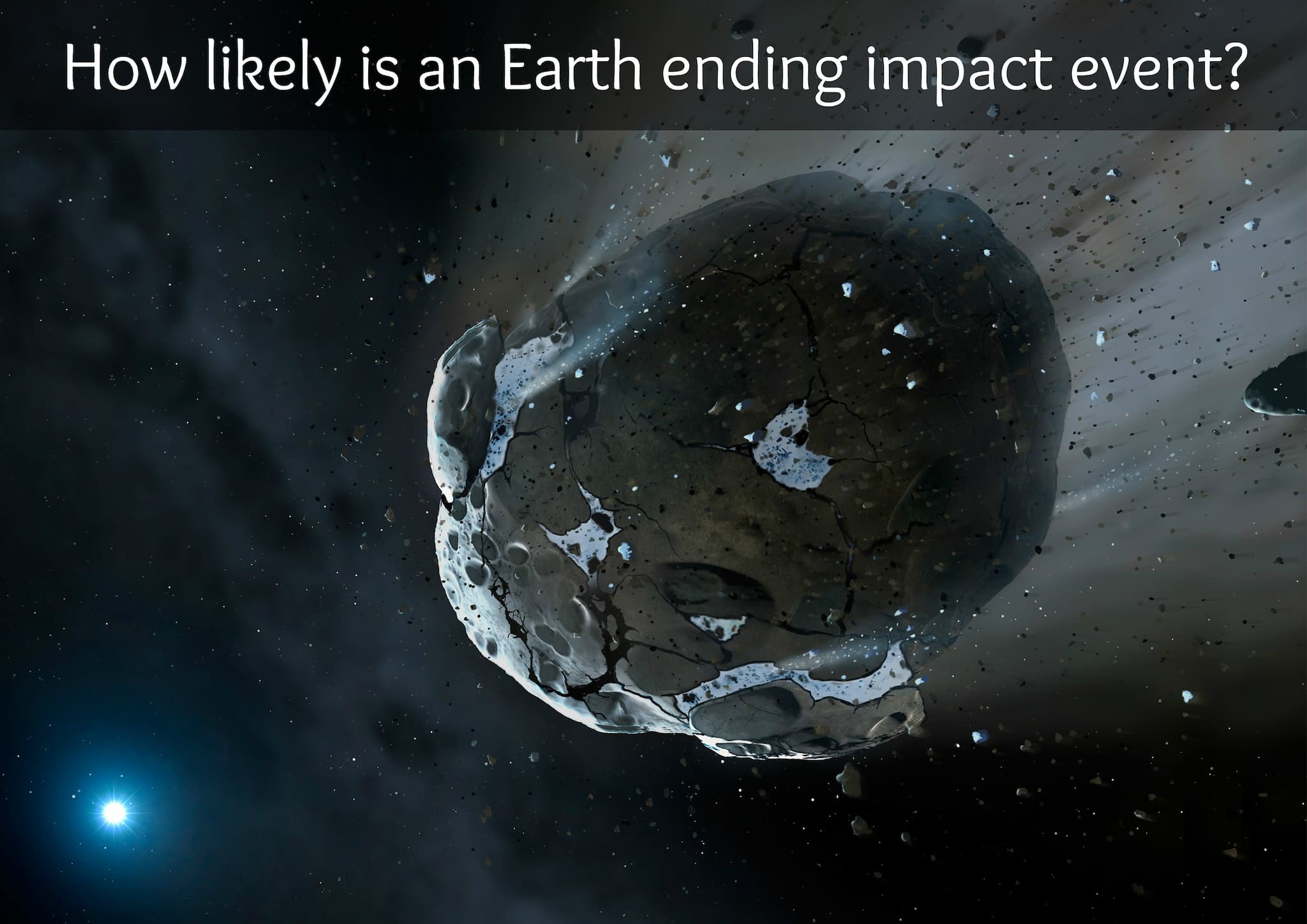 A rock doesn’t have to be the size of a planet to pose a serious threat to life on Earth. In fact, it only takes an asteroid a few kilometers in diameter to cause a global catastrophe. The risk for such an impact is very low (even with some serious rounding in favor of an impact event, the likelihood is still only about 1 in 500,000). Moreover, NASA has announced that no known objects threaten Earth’s safety in the near future. That being said, in my opinion, an asteroid impact is the most likely doomsday scenario of all.

First, asteroids are very hard to find because, well, space is a rather big place. Second, asteroids don’t emit any light of their own. So how do we find potentially deadly asteroids (or any asteroid at all, for that matter)?

As we survey the sky, we look for the asteroid’s reflected light as it moves in relation to the star-field behind it. Then, after some educated guesses and quite a bit of math, we determine its size and orbit, and finally, whether or not it poses a threat. But of course, the Earth is a rather large object when compared with asteroids, so how can such a small object cause such destruction to a planet as big as Earth?

The key to an asteroid's awesome destructive power is kinetic energy. Any asteroid large enough to survive the trip through our atmosphere will hit the Earth at a very high speed. The speed at which the asteroid hits Earth depends on many things, such as the size and the shape of the asteroid and the speed it was traveling when it entered the atmosphere. Then there is the angle of impact and the mass of the asteroid; these also play a big role in how destructive the blow is to our planet.

As an example: if you take a worst-case scenario, a 5-kilometer diameter object traveling between 15 and 20 kilometers per second will have kinetic energy equivalent to 300-million nuclear weapons. “Immediate effects would include an eardrum-puncturing sonic boom, intense blinding light, severe radiation burns, a crushing blast wave, lethal balls of hot gall, winds with speeds of hundreds of kilometers an hour, and flash fires. Longer term effects would alter Earth’s climate,” according to the Los Alamos National Laboratory.

Even then, it doesn’t take a climate changing impact to cripple civilization as we know it. A much smaller, well-placed asteroid impact could take out an entire city, the results of which could destroy a country and the general global economy (imagine if such an asteroid were to hit New York City, Beijing, or London? Not a good thing). So even if an asteroid doesn’t wipe us out like the one that supposedly took the dinosaurs, a small one could have a devastating effect on life as we know it.

That being said, and to repeat myself, there are currently no known asteroids on a collision course with Earth and the chances of an asteroid hitting us from out of the blue are very small.