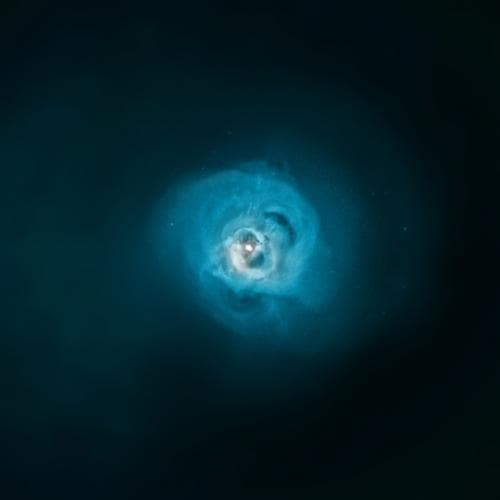 There is a lot that we don't know about the cosmos; however, we do know quite a bit about the matter that constitutes it. Looking off into the farthest reaches of our galaxy, we can analyze patterns of light and determine the composition of even the most distant planets and stars. So astronomers were a little surprised (that's putting it mildly) when they discovered a pattern corresponding to no known element.

At the time, the astronomers, Esra Bulbul, Adam Foster, Randall Smith, Scott Randall and their team, were looking at the X-ray spectrum of a set of galaxy clusters. They were attempting to find emission lines (patterns) that are too faint to be seen by looking at one galaxy alone. You see, just as planets tend to cluster around stars, galaxies tend to cluster around one another. Case in point, the Milky Way is a member of a "Local Group" of about three dozen galaxies (including our closest galactic neighbor, the Andromeda Galaxy, located about 2 million light-years away). From our own vantage point on Earth, the closest large galactic cluster is the Virgo Cluster. It houses an astounding 2,000 galaxies (sadly, it is also about 50 million light-years away, so we won' be visiting anytime soon). Because there are so many galaxies congregated in this area, interstellar gas builds up and is easier to detect, which is precisely what Bulbul and her team were doing when they made the discovery.

Ultimately, the dark void of space is not, in fact, a void. Rather, the space between galaxies and stars and planets is generally filled with hot  gas  (the temperature is often of order ten million kelvin, or higher). This gas is composed of heavy elements that escape from the galaxies and accumulate in the space between these large cosmic structures. These gas elements can be detected from their emission lines in X-ray (they generally include things like oxygen, neon, magnesium, silicon, sulfur, argon, and so on).

According to Harvard scientists, "the relative abundances of these elements contain valuable information on the rate of supernovae in the different types of galaxies in the clusters since supernovae make and/or disburse them into the gas." As the team was looking at these emission lines and determining their composition, they uncovered a line with no known match—a line that does not correspond to any know element. In short, they saw a line in a particular spectral interval not expected to have any features.

What could this line be? The scientists interpretation of the data is incredible, and has amazing implications. They suggest that the line is the result of the decay of a putative, long-sought-after dark matter particle, the so-called "sterile neutrino." Sterile neutrinos are, at this point, entirely hypothetical particles, which is why the discovery would be so notable. These particles are neutral leptons – neutrinos that do not interact via any of the fundamental interactions of the Standard Model except gravity. The scientists note, "it had been suggested that the hot X-ray emitting gas in a galaxy cluster might be a good place to look for dark matter signatures, and if the sterile neutrino result is confirmed it would mark a breakthrough in dark matter research."

That said, it is entirely possible that this is nothing more than a statistical error. More data will be needed to make this determination; however, recent unpublished results from another group tend to support the detection of this feature; the team suggests that observations with the planned Japanese Astro-H X-ray mission in 2015 will be critical to confirm and resolve the nature of this line.