The Ember Cube Could Save Millions of Lives — Also, Your Groceries.

The world’s first self-refrigerated, cloud-based shipping box has all kinds of potential uses 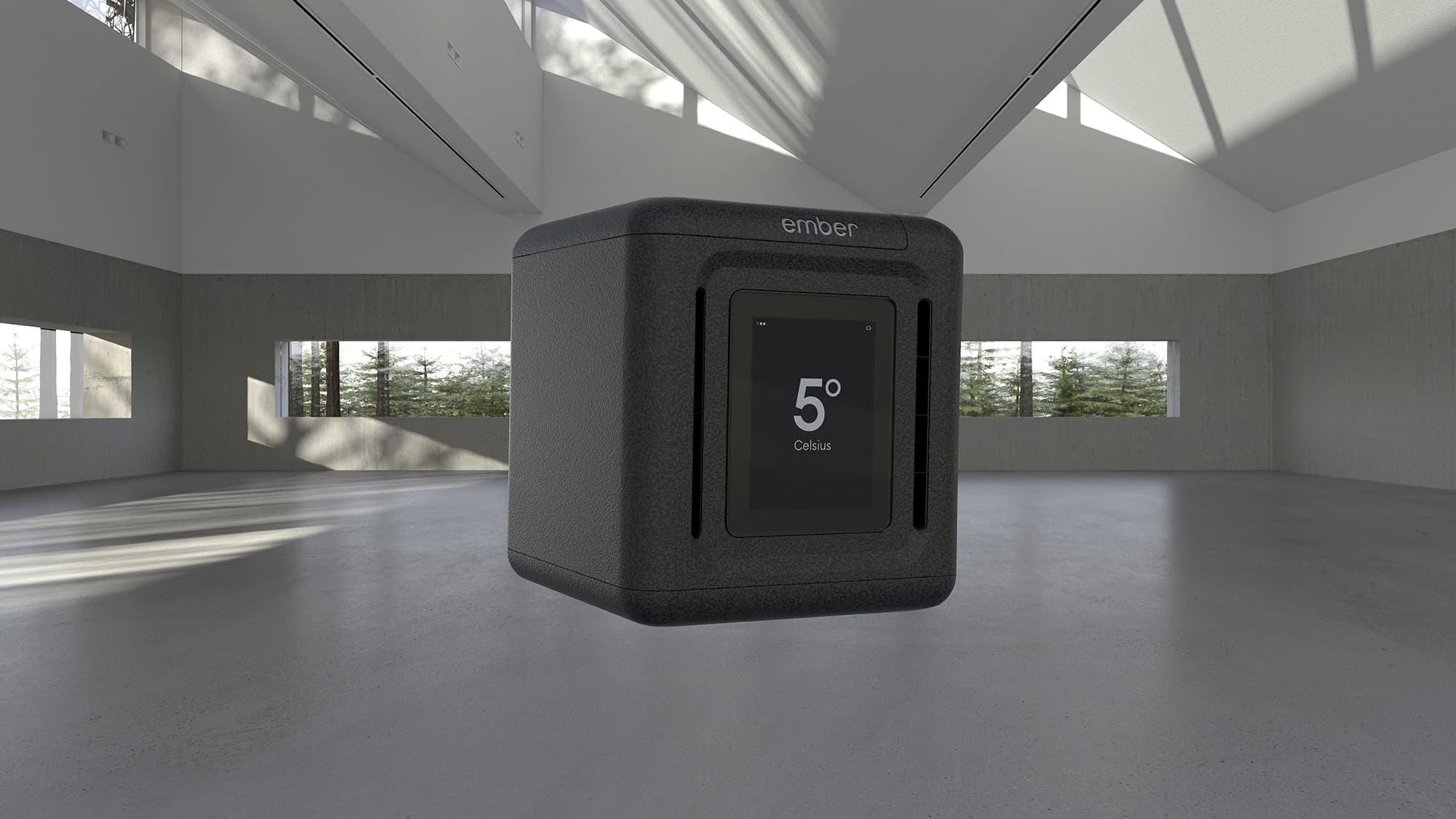 Since it was founded 2010, Ember has been known for one thing: A smart mug that keeps beverages at a consistent temperature. It's iterated on the original Ember Mug, and introduced metallic and travel-friendly versions, but the company had been laser-focused on making sure you never have to experience cold coffee or tepid tea ever again. Until now.

Earlier this month, Ember announced the Ember Cube, a square device that uses the company's temperature control technology to keep the contents of its chamber cold. While similar in concept to the Ember Mug, the Ember Cube signifies a new path for the consumer-facing company and could be transformational for transporting much-needed medical supplies around the world.

The Cube was developed primarily as a tool for medical professionals who routinely deal with vaccines, organs, and temperature-sensitive materials, but down the line, Ember sees the potential for the technology to improve the food supply chain and reduce waste. To be clear, using refrigeration to preserve medical supplies isn’t new, but the Ember Cube was designed to address specific pain points, like tracking and returning packages, and getting real-time updates on the cube’s internal and external temperatures. If knowledge is power, the Ember Cube is a Goliath in a world full of Davids.

Origins of the Ember Cube

When we asked about the Ember Cube's origins, Ember CEO Clay Alexander explained that the company was alerted to a problem the Mayo Clinic was encountering abroad in 2017.

“The Mayo Clinic was having difficulty distributing insulin and vaccines (temperature-sensitive medicines) to remote villages in Haiti due to a lack of electricity,” Alexander said. “This issue inspired Ember to build the first miniature refrigeration device to transport temperature-sensitive medicine. It was chargeable with a portable solar panel. We tried the prototype in Haiti, and the project was met with great success.”

The two parties were connected by Wyatt Decker, who serves on the boards of both Ember and the Mayo Clinic in Arizona. The response from doctors was so positive that Ember decided to approach Cardinal Health, one of the largest pharmaceutical companies in the world. According to its website, Cardinal Health serves almost 90 percent of U.S. hospitals, and operates in 30 countries. Most importantly, the company ships pharmaceuticals to 60,000 pharmacies domestically, and 140,000 locations globally.

It's critically important for non-shelf stable medicine to be able to be transported at safe temperatures around the world, Alexander explained. That presented a unique opportunity for Ember and Cardinal Health to team up.

"The lightbulb moment for the partnership came when I saw the pack-out line at Cardinal Health's specialty pharmaceutical distribution center,” Alexander said. “I knew we could create something together to transform their current pharmaceutical cold chain."

Cardinal Health is headquartered in Dublin, OH, and has 39 domestic pharmaceutical centers around the U.S, 10 in Canada, and 11 in China. While its distribution centers are clustered in these areas, it works with healthcare providers in over 30 countries on four continents. The needs of a company that operates on this scale were what drove Ember to develop the Cube’s unique, high-tech design.

The Technology Behind the Ember Cube

From the outside, the Ember Cube looks like a fireproof safe with a large LED screen on its front face. It'll be available in multiple sizes, with the largest one able to hold up to 900 cubic inches (between 9.6-inches and 9.7-inches tall, wide, and deep) of materials. Ember told Futurism that Cardinal Health plans on making the first-generation Ember Cube available to medical professionals by the middle of 2022. While the cube’s exterior looks cool, it's what's on the inside that matters.

A big part of the Ember Cube's transformational potential comes from Ember's refinement of its temperature-control technology. The current-generation Cube is designed to stay within two to eight degrees Celsius (35.6 to 46.4 degrees Fahrenheit). For reference, Pfizer says its Covid-19 Vaccine can be safely stored at two degrees Celsius for up to 31 days. Likewise, the U.S. National Institutes of Health says that organs can be transported safely if they're kept at between four to eight degrees Celsius.

Ember hasn't said anything specific about what materials the Ember Cube will carry, but it's clear that the temperature range it selected during the Cube's four years of development was chosen carefully. Futurism was also told that Ember is developing additional versions of the Ember Cube that support even lower temperatures, but there's no information about when those models will be available.

Surmounting Challenges to Transporting Supplies Around the World

Ember faced a number of technical obstacles during the Ember Cube's development but when pressed about what the largest one was, Alexander said it came down to balance.

“The most significant overall challenge was designing the world's first self-refrigerated, cloud-based shipping box that could withstand repeated 10-foot-high drops onto concrete,” he said. “At the same time, it needed to be lightweight and compact to meet or exceed the shipping costs of the industry's current cold chain shipping boxes (which are composed of cardboard, Styrofoam, and ice packs).”

Almost all of the packages shipped around the world come with a tracking number, which allows you to check on their location as they make it to your home. Generally, you'll only get updated when a package is scanned at a delivery service's hub, which isn't specific enough for doctors waiting for potentially lifesaving materials. To combat this issue, the Ember Cube is designed with a LTE-connected cellular radio, which allows them to be tracked in real-time.

In light of the recent dust up between the FAA (Federal Aviation Administration) and U.S. telecom companies over the possibility of cellular waves (5G, specifically) interfering with an airplane's landing gear, I was curious to know how the Ember Cube would balance real-time tracking and air travel. According to Ember, the Cube can detect when it's in a moving plane and automatically enter an airplane mode. When it's out of the plane, the Ember Cube will automatically re-enable its 3G antenna, and real-time tracking can continue.

The Ember Cube was designed to be shipped around the world, which is why we weren't surprised to learn it can last up to 10 days on a single charge. More importantly, the Cube can be recharged with a USB-C power adapter, just like many modern laptops, tablets, phones, and other electronics. By opting for a standard charger instead of developing a proprietary one, Ember has improved the odds of medical staff having a spare power adapter on hand at all times.

What’s more, one of the Ember Cube's most innovative features is its ability to "print" a digital return label when it's delivered. In an optimal scenario, the Ember Cube can be unloaded at its destination, quickly re-scanned by the delivery person, and returned as soon as possible. Cutting these few manual steps out of the Ember Cube's return process can save time, and won't require the medical staff at remote locations to set up or maintain a printer. Plus, it makes the Ember Cube a little more environmentally friendly, which can't hurt.

Can the Ember Cube Cut Down on Food Waste Too?

Ember is focusing on the Ember Cube's capabilities as a device for medical professionals, but the company hasn't forgotten about its roots as a company that solves common problems for everyone. Read the full Ember Mug review.

Alexander sees some potential opportunities for the Ember Cube in the future."The Cubes apply to a wide range of cold-chain needs, including the food industry,” Alexander said. “My vision is to start in healthcare and eventually apply the technology to the food/grocery delivery space. We can provide a more robust and reliable way to transport refrigerated and frozen foods directly to consumers while at the same time saving millions of pounds of waste, since our boxes are reusable and return themselves after each shipment via our return-to-sender technology."

While the Ember Cube's impact in the medical field is potentially transformative, it's hard not to also get excited about its applications in business-to-consumer situations. According to a 2019 study conducted by the Food and Agriculture Organization of the United Nations, between eight and 26 percent of food is lost between when it is harvested and when it's supposed to reach store shelves. The “Fruits And Vegetables” and “Roots, Tubers, and Oil-Bearing Crops” are the two categories that incur the worst losses (both over 20 percent), while the “Meat and Animal Products” category clocks in at between 10 and 15 percent.

Some of the logistical challenges are outlined in the USDA report, “Protecting Perishable Foods During Transport by Truck.” The federal agency notes that “the object of refrigerating food products is to maintain quality and prolong shelf life by keeping the product temperature at the point where metabolic and microbial deterioration are minimized. Maintaining the desired or ideal holding temperature is a major factor in protecting perishable foods against quality loss during storage and distribution. Quality loss is a function of both time and temperature abuse. Abuse is additive and, even for short periods of time during loading, transit, and unloading, may cause a considerable amount of quality loss by the time the product reaches its destination.”

If the Ember Cube could be adopted by the agricultural and shipping industry en masse, it could result in thousands of tons of food saved each year. It may take years — if not decades — for the Ember Cube to move from transporting a life-saving heart to the food on your plate, but it's hard not to get excited by technology capable of providing such value.