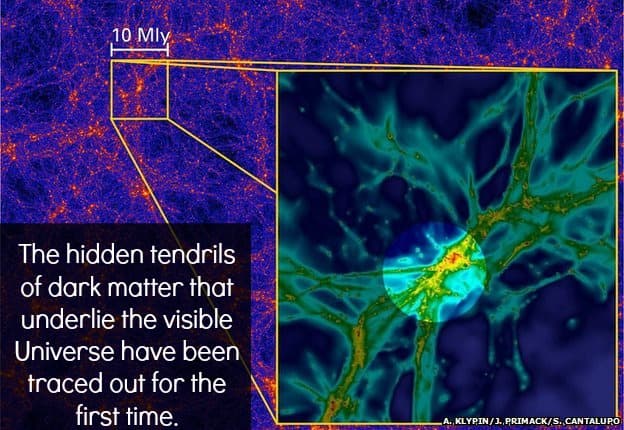 Gradually, our developments in science and technology led us to develop one of the most important inventions to satisfy our need for knowledge and our inherent curiosity - the telescope. Through it, we learned about our galaxy and the billions of stars within it. Hubble showed us that our galaxy isn't alone, and helped us see that we are actually a single speck within a vast and ever-expanding universe.

Today, astronomers and cosmologists strongly believe that the largest scale structure of the universe is an incomprehensibly massive 'web'. The invisible 'silk' of this web is thought to be long tendrils of dark matter, with galaxies caught like flies within it.

However, observing this web is incredibly difficult due to our inability to see dark matter, as well as its sheer size in comparison to our local group of galaxies. In the past, we have detected the web by utilizing the gravitational lensing of the light from distant galaxies, allowing us to see the distribution of the dark matter. Professor Alexandre Refregier, of ETH Zurich, explains this method by noting that ordinary matter traces the filaments and structures that are defined by the dynamics of the dark matter. Computer models ultimately show that, as the universe grows and forms, matter becomes clustered along these filaments as a result of its gravity.

Recently, astronomers - using the 10-metre  Keck telescope in Hawaii - have become confident that they have collected the first direct images of a section of this  dark matter network by utilizing the power of the 'comic flashlights' - our friendly quasars. This quasar in particular sits 10 billion light-years away from our galaxy and is shining in the direction of a gas cloud 2 million light-years across.

The gas heats up and emits radiation that appears to be tracing the very tendrils of dark matter that astronomers predicted. This hydrogen gas is colder than most gas in our own galaxy and is also very distant, making it difficult to detect. Previously, we relied on hot gas heated by nearby stars that are emitting X-rays, but by looking at the right wavelengths, we can see the hydrogen heated by the distant quasar.

The observations trace out the dark matter filament which the gas has been gravitationally attracted to.  This new technique, using quasars to observe dark matter, has also been used previously to see dark galaxies, but these are much smaller and denser.

Dr Cantalupo from UCSC states that: "Some of this gas will fall into galaxies, but most of it will remain diffuse and never form stars." The astronomers were very lucky to find this perfect scenario where the quasar beam is pointing directly towards the enormous gas cloud. The researchers believe that what they see is just a small section of a dark matter filament that may be even more extended than this!

It is always good news for scientists when results comply with long and laborious calculations. However, not everything was so simple, and the results actually show around 10 times more gas present in the region than the computer simulations suggested. Why? The computer models may be missing a vital component associated with the physics of galaxy formation and how they interact with the dark matter filaments, or the results may be limited by the resolution of the current computer models.

Either way, Prof Refregier has said: "We now have very precise measurements of the amount of ordinary matter and dark matter in the Universe," and "we can only observe a fraction of the ordinary matter, so the question is what form the remainder takes. These results may imply that a lot of it is in the form detected here".