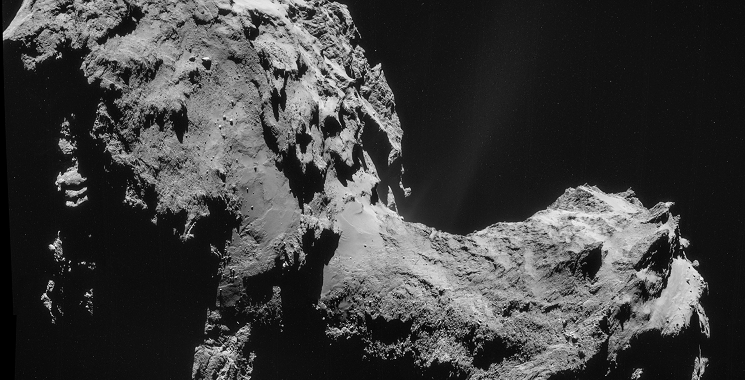 If you could smell this comet, you would probably wish that you hadn’t.

ESA scientists have discovered the smell of the comet 67P/Churyumov-Gerasimenko (67P/C-G): rotten eggs, horse urine and formaldehyde. Rosetta spacecraft's Orbiter Sensor for Ion and Neutral Analysis (ROSINA) has been ‘sniffing the fumes’ of 67P/C-G with its two mass spectrometers. “The perfume of 67P/C-G is quite strong, with the odour of rotten eggs (hydrogen sulphide), horse stable (ammonia), and the pungent, suffocating odour of formaldehyde," said Kathrin Altwegg, the principal investigator for ROSINA. "This is mixed with the faint, bitter, almond-like aroma of hydrogen cyanide. Add some whiff of alcohol (methanol) to this mixture, paired with the vinegar-like aroma of sulphur dioxide and a hint of the sweet aromatic scent of carbon disulphide, and you arrive at the ‘perfume’ of our comet.”

The density of these molecules is very low, and that the main part of the coma is made up of water and carbon dioxide, mixed with carbon monoxide.

The key point, however, is that a detailed analysis of this mixture and how it varies as 67P/C-G grows more active will allow scientists to determine the comet’s composition. Further work will show how 67P/C-G compares with other comets, for example by revealing differences between comets originating from the Kuiper Belt (like 67P/C-G) and comets that hail from the distant Oort cloud (like Comet Siding Spring, which recently flew past Mars). The goal is to gain insights into the fundamental chemical make-up of the solar nebula from which our Solar System and, ultimately, life itself emerged.

ROSINA is a combination of two mass spectrometers and a pressure sensor. The mass spectrometers determine the composition of the comet's atmosphere and ionosphere, measure the temperature and bulk velocity of the gas and ions, and investigate reactions in which they take part. The ROSINA pressure sensor is capable of measuring both total and ram pressure, and will be used to determine the gas density and rate of radial gas flow.

Rosetta is an ESA mission with contributions from its Member States and NASA. Rosetta is the first mission in history to rendezvous with a comet. It is escorting the comet as they orbit the Sun, and will deploy a lander.