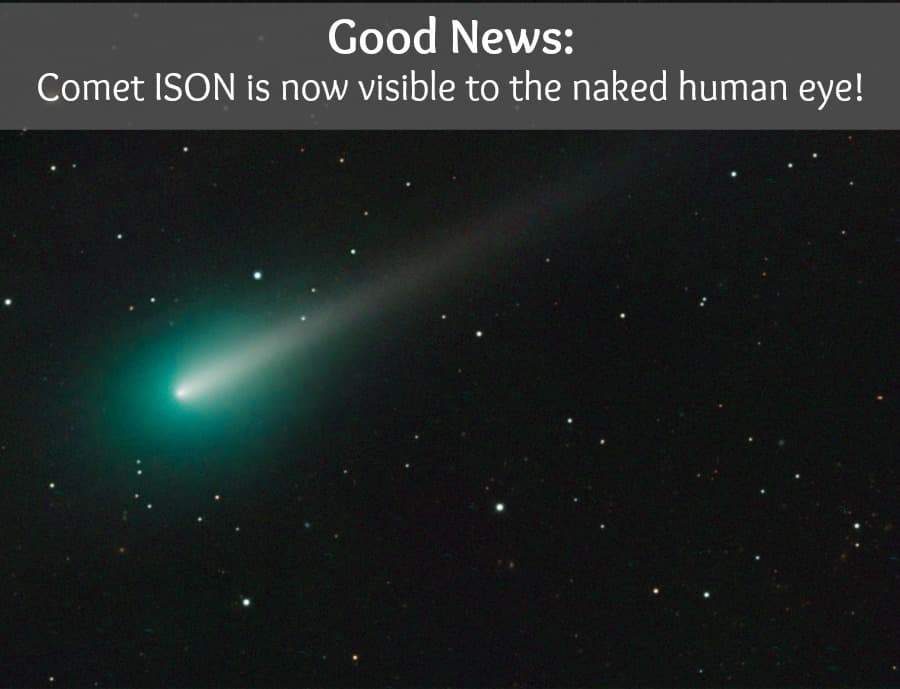 Comet ISON is currently making its way across our solar system; it is hurtling towards the Sun at over 130,000 mph (215,000 kmh). And it just became a naked eye object (meaning that you can see it without the aid of binoculars or other instruments). So tomorrow morning, provided that you have clear skies in your area, some of you will be able to see Comet ISON low on the eastern horizon before sunrise. Of course, unless you really know what you are looking for, it might be a good idea to bring along a pair of binoculars, as the comet is still a bit hard to see with the untrained eye. The human eye can perceive objects that are as faint as +6.5 (the lower the number, the easier the object is to see). ISON just reached a magnitude of +5.4.

This chunk of ice and rock has spent more than 4 billion years in the Oort cloud (the frozen depth of space that is home to many of our solar system’s comets). After billions of years, this amazing object is finally visible.  Most people in the Northern Hemisphere will be able to easily see it; however, it is extremely difficult to see from the Southern hemisphere because it is so close to the horizon.

Its name stands for "International Scientific Optical Network" (after the telescope used to observe it). It was discovered in September of 2012 by two amateur stargazers, Vitali Nevski and Artyom Novichonok, who both hail from Russia. It will reach its perihelion (closest approach to the Sun) on November 28th 2013. At that time, it will be 1.15 million miles (1.86 million km) from the center point of the Sun. For comparison, Mercury (the closest planet to the Sun) orbits at a distance of 36 million miles (58 million km), which means that this little comet will be much, much closer.

According to Seth Jarvis, director of Clark Planetarium, it will get so close to the sun that it will reach 5,000 F (2,700 C), which is hot enough to melt iron. Unfortunately, the encounter may be the death of ISON. Solar radiation will boil off the comet’s water and the gravitational stresses will be extreme. Because of this hostile environment, many comets with similar flight paths do not survive. Instead, they break apart as they travel past the sun; however, according to a presentation at the Division for Planetary Sciences of the American Astronomical Society in early November (and an upcoming paper), Comet ISON could make it through this journey in one piece. Numerical simulations show that its size (about 3.5 mi or 5.4 km) and density should allow it to escape the sun’s intense heat and gravity without vaporizing or breaking up. Astronomers are hopeful that ISON will make it around the Sun, as it will be even easier to see after making this pass.