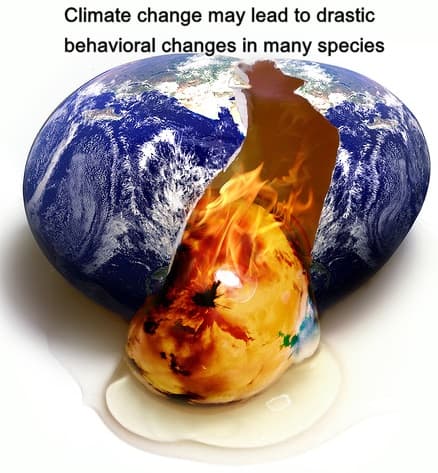 There are many examples of evolutionary changes in species that result from drastic shifts in environmental conditions. Charles Darwin provided some of the first evidence of rapid adaptations based on environmental factors when he studied finches in the Galapagos Islands. Like the finches, who quickly developed new beak structures over a small number of generations because of changes in available food, several species have already been forced to alter their habits and behaviors because of the environmental impacts of climate change. Recent research in this area focuses not only on possible physical adaptations, but also alterations in behavioral patterns.

Previously, studies have indicated that climate change had led to changes in the migration patterns of birds. Biologist Allen Hurlbert notes that,“timing of bird migration is something critical for the overall health of bird species. They have to time it right so they can balance arriving on breeding grounds after there’s no longer a risk of severe winter conditions. If they get it wrong, they may die or may not produce as many young. A change in migration could begin to contribute to population decline, putting many species at risk for extinction.”

And more recently, different types of behavioral effects have been studied, including the social behavior of sweat bees. Roger Schürch from the University of Sussex has indicated that the bees may likely switch from their solitary patterns of living to forming small colonies by the year 2080. Sweat bees are known to exhibit more social lifestyles in warmer climates, this is largely due to the fact that they are better able to move around faster (they travel more quickly) and make more foraging runs. This allows them to raise more offspring than bees in cooler climates. Schürch's projection of the year 2080 comes from predictions of temperature made by a program that takes different possible climate shifts into account for the future.

Changes in rainfall and temperature are common factors that prevent plants and animals from thriving in their current environments. As a result, some animals will be forced to migrate to find more suitable temperatures or precipitation patterns. This migration will cause major disruptions to the species from both their old and new habitats. And of course, it's not just land species that will be impacted. Changes also occur related to rising oceans and ocean chemistry, and we have already see the impact that this has on marine life. The impact is evidenced by the plethora of species rapidly shifting towards the poles. Additionally, a study conducted by UC Santa Barbara's National Center for Ecological Analysis indicated that increased temperatures in the oceans have caused marine species to undergo changes in several behaviors such as breeding, feeding, and spawning patters.

According to Justin Touchon, of the Smithosonian Troical Research Institute in Panama, one particular species that has been prone to behavioral changes related to rainfall is the tree frog. Remarkably, many tree frogs lay eggs that can develop either in water or on land, but the eggs that develop on land need to be exposed to rainwater  in order to hatch. Nonetheless, many tropical frogs lay their eggs out of water. This behavior protects the eggs from aquatic predators, such as fish and tadpoles, but also increases their risk of drying out. In most tropical locations (where the tree frogs live) there are consistent high levels of precipitation, so laying eggs on land is not a very large risk as they generally stay wet.  However, Touchon asserts that, “over the past four decades, rainfall has become more sporadic during the wet season. The number of rainy days decreased, and the number of gaps between storms increased.” Unfortunately, as storms become sporadic, the chance of rain exposure decreases... and so does egg survival. Thus. as weather patterns have changed, the advantage of laying eggs out of water has decreased.

Behavioral ecologist Timothy C. Roth II even contends that environmental factors due to climate change could impact the cognitive and mental capacities of different species. He acknowledges that there is little research on these possibilities as of yet, but believes they will become more thoroughly addressed in the near future.

Please check out our friends at Planetary Evangelism for more stories related to science and cosmology.