Cleaning Your Hands May Be More Complicated Than You Think 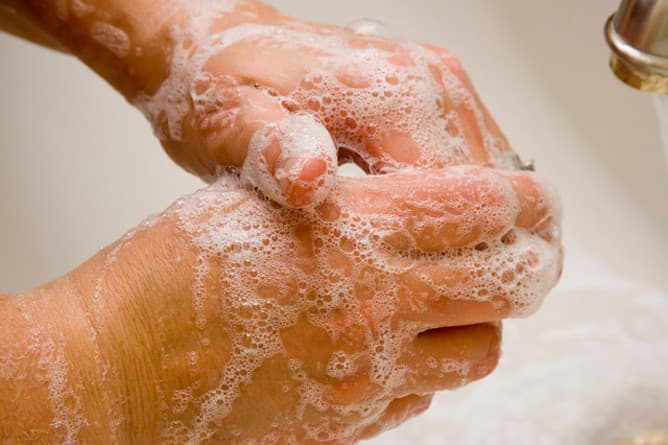 The next time you wash your hands with a liquid soap claiming to be antibacterial, keep in mind that you may not actually be sanitising them. There’s no evidence that the antibacterial ingredients of such soaps, which is usually triclosan, do anything more than plain soap and water.

Triclosan is a potent antibacterial agent able to kill most types of bacteria, both healthy and disease-causing ones. Its use in hospital hand washes has undoubtedly saved millions of lives by preventing infection and is not being questioned. But it is also used at much lower concentrations in hundreds of household products including antibacterial liquid soaps and other personal-care products, such as toothpastes. And products sold as household antibacterial soaps are often no more effective than plain soap and water.

Indeed, using triclosan at the low levels put into these soaps and other domestic products may even encourage bacteria to become resistant to antibiotics. Exposing bacteria to low levels of germ-killing chemicals can turn on lots of the mechanisms they have to protect themselves against such chemicals. Bacteria can thicken their outer walls, turn on pumps designed to expel toxic chemicals and even produce enzymes to inactivate the chemicals.

Low levels of exposure that don’t kill the bacteria can help them be ready to successfully defend themselves against later challenges.

Triclosan in the Spotlight:

Triclosan hit the headlines in December 2013 when the two agencies that have legal oversight over its use in the United States – the US Food and Drug Administration (FDA) and the US Environmental Protection Agency (EPA) co-announced they were taking a closer look at its safety and effectiveness.

In fact, the US Congress had tasked the FDA with reviewing the evidence for the effectiveness of antibacterial soaps way back in the 1970s, but the assignment was never completed. The Natural Resources Defense Council, a US-based non-profit environmental advocacy group, was incensed by the delay of more than 30 years and took court action against the FDA for their failure to act. The EPA is involved in the review because triclosan is also used as a pesticide. The agency reviews the active ingredients of all pesticides every 15 years, but this latest review is ten years early.

For its current use in household products to continue, the FDA and EPA have to remain convinced that triclosan is both effective and safe. But the effectiveness of triclosan products as antibacterial agents has been contentious for many years because of the lack of evidence that they provide a germ-killing benefit. The exception is for toothpastes containing triclosan, which appear to be effective for reducing the gum disease gingivitis.

The US state of Minnesota has already placed a ban on triclosan that will take effect in 2017. Similarly, Johnson & Johnson, Procter & Gamble and Avon have committed to phasing triclosan out of all their consumer products by 2015. Such steps are likely to have knock-on effects.

Questions about the safety of triclosan have also been raised recently because evidence suggests some chemicals used widely in personal-care products, including triclosan, can mimic or interfere with hormones, at least in laboratory-based experiments and in animal models. Known as endocrine-disrupting compounds, if these chemicals had a similar effect on people, they could potentially disrupt our bodies’ delicately balanced, finely-tuned and exquisitely sensitive endocrine systems.

In laboratory tests and in animals models, triclosan has been shown to behave like the human hormone oestrogen. It can dock at oestrogen receptors on human cells maintained in the lab and start a chain of cellular events in the same way as natural oestrogen. So far, there’s no evidence showing that triclosan is an endocrine-disrupting compound in humans.

But new research shows very low daily doses of triclosan can encourage cancer progression in mice that already have oestrogen-dependent breast cancer. This work doesn’t prove that triclosan is an endocrine-disrupting compound that mimics oestrogen or that it can promote breast cancer in humans. But it does add weight to the argument that more research is needed into the effects of triclosan in humans and animals given its widespread use.

It also suggests that the recently announced review by the US FDA and EPA is timely and worthwhile. In the meanwhile, plain soap and water may be the way to go for safe, clean hands.

Christine Carson has in the past received funding from The Rural Industries Research & Development Corporation and companies in the natural products and complementary and alternative medicines industry. Read the original article.