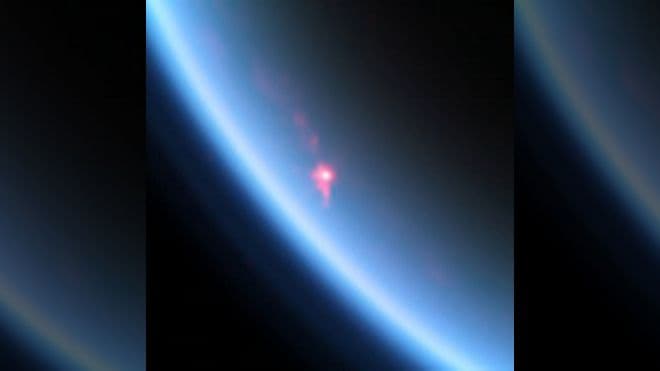 Titan is one of the most amazing moon's in our solar system. Not only does it have a number of lakes and rivers, it is one of the most Earth-like worlds that we know of. This rocky body is equipped with an appreciable atmosphere (mostly made up of nitrogen, like Earth), and it is host to a vigorous mountain system and innumerable valleys. And recent analyses have indicated that, on Titan, sunlight glints off the wind-ruffled lakes, much like here on Earth.

However, the image looks a little more like an alien beacon than reflective water. Nevertheless, the most recent computer models indicate that the measurements of Titan’s northern polar region (which were made by Cassini’s Visual and Infrared Mapping Spectrometer on July 26 and Sept. 12, 2013) captured images of wavy seas reflecting the light of the Sun. As University of Idaho planetary scientist Jason Barnes noted in his presentation to the Lunar and Planetary Science Conference in Houston this week, "If correct, this discovery represents the first sea-surface waves known outside of Earth."

So if it is confirmed, this will be another astronomy first!

Although this is exciting news, don't plan any surfing excursions just yet. The photo shows the surface of Punga Mare, one of Titan's typically calm seas, being disturbed by tiny ripples. And the ripples are tiny. The data indicates that these waves are only about 2 cm in height, or about 0.8 inches. As such, surfing on Titan would be decidedly underwhelming. Of course, there are a number of other problems that one would have to face if they wanted to surf on Titan. Although the world is one of the most Earth-like, it is still rather unEarth-like. Ultimately, most of the other rocky bodies that we know of are either scorched to a crisp or seemingly dead worlds that lack an appreciable atmosphere, so being the most Earth-like isn't terribly difficult.

What does this mean? Well, for starters, the liquid lakes and rivers are flammable. At least, they would be if there was any oxygen. Instead of the comforting H2O that we are all familiar with, Titan has lakes, rivers, and rain of liquid ethane and methane, which are forms of hydrocarbons that make up natural gas (it consists primarily of methane). You might recognize natural gas as the ridiculously costly substance that powers your car.  So to summarize, on Titan, quadrillions of dollars worth of natural gas falls from the sky (when combined, it exceeds the amount found on Earth by tens, perhaps hundreds, of times).

So this alien world may be Earth-like is a number of ways, but it is still rather alien.