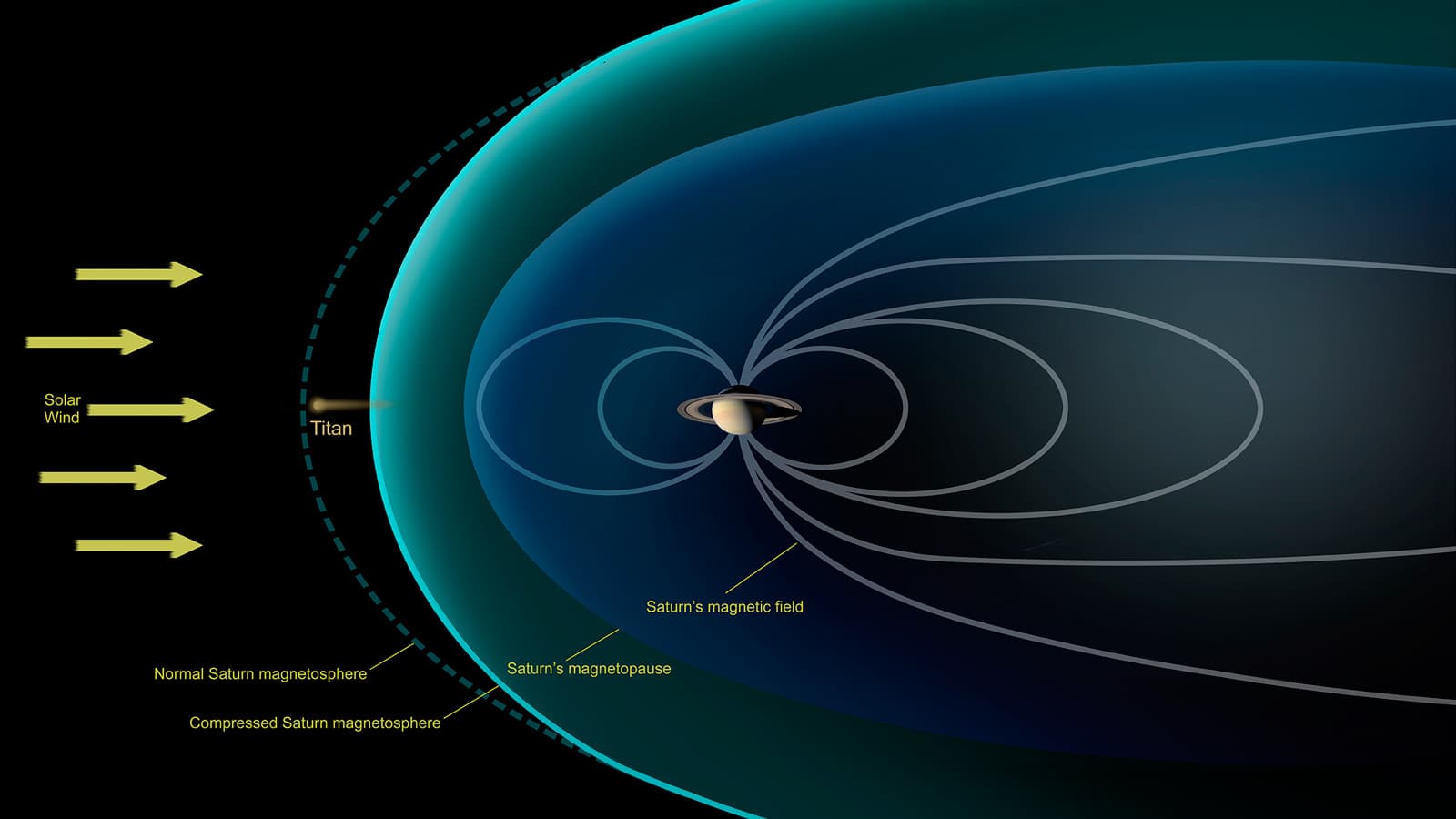 Researchers studying data from NASA’s Cassini mission have observed that Saturn’s largest moon, Titan, behaves much like Venus, Mars or a comet when exposed to the raw power of the solar wind. The observations suggest that unmagnetized bodies like Titan might interact with the solar wind in the same basic ways, regardless of their nature or distance from the Sun.

Titan is large enough that it could be considered a planet if it orbited the Sun on its own, and a flyby of the giant moon in Dec. 2013 simulated that scenario, from Cassini’s vantage point. The encounter was unique within Cassini’s mission, as it was the only time the spacecraft has observed Titan in a pristine state, outside the region of space dominated by Saturn’s magnetic field, called its magnetosphere.

“We observed that Titan interacts with the solar wind very much like Mars, if you moved it to the distance of Saturn,” said Cesar Bertucci of the Institute of Astronomy and Space Physics in Buenos Aires, who led the research with colleagues from the Cassini mission. “We thought Titan in this state would look different. We certainly were surprised,” he said.

The solar wind is a fast-flowing gale of charged particles that continually streams outward from the Sun, flowing around the planets like islands in a river. Studying the effects of the solar wind at other planets helps scientists understand how the Sun’s activity affects their atmospheres. These effects can include modification of an atmosphere’s chemistry as well as its gradual loss to space.

Titan spends about 95 percent of the time within Saturn’s magnetosphere. But during a Cassini flyby on Dec. 1, 2013, the giant moon happened to be on the sunward side of Saturn when a powerful outburst of solar activity reached the planet.

The strong surge in the solar wind so compressed the Sun-facing side of Saturn’s magnetosphere that the bubble’s outer edge was pushed inside the orbit of Titan. This left the moon exposed to, and unprotected from, the raging stream of energetic solar particles.

Using its magnetometer instrument, which is akin to an exquisitely sensitive compass, Cassini has observed Titan many times during the mission’s decade in the Saturn system, but always within Saturn’s magnetosphere. The spacecraft has not been able to detect a magnetic field coming from Titan itself. In its usual state, Titan is cloaked in Saturn’s magnetic field.

This time the influence of Saturn was not present, allowing Cassini’s magnetometer to observe Titan as it interacted directly with the solar wind. The special circumstance allowed Bertucci and colleagues to study the shockwave that formed around Titan where the full-force solar wind rammed into the moon’s atmosphere.

At Earth, our planet’s powerful magnetic field acts as a shield against the solar wind, helping to protect our atmosphere from being stripped away. In the case of Venus, Mars and comets — none of which is protected by a global magnetic field — the solar wind drapes around the objects themselves, interacting directly with their atmospheres (or in the comet’s case, its coma). Cassini saw the same thing at Titan.

Researchers thought they would have to treat Titan’s response to the solar wind with a unique approach because the chemistry of the hazy moon’s dense atmosphere is highly complex.

But Cassini’s observations of a naked Titan hinted at a more elegant solution. “This could mean we can use the same tools to study how vastly different worlds, in different parts of the solar system, interact with the wind from the Sun,” Bertucci said.

Bertucci noted that the list of similarly unmagnetized bodies might include the dwarf planet Pluto, to be visited this year for the first time by NASA’s New Horizons spacecraft.

“After nearly a decade in orbit, the Cassini mission has revealed once again that the Saturn system is full of surprises,” said Michele Dougherty, principal investigator of the Cassini magnetometer at Imperial College, London. “After more than a hundred flybys, we have finally encountered Titan out in the solar wind, which will allow us to better understand how such moons maintain or lose their atmospheres.”