What We Can Learn From Stella, The Pit Bull Who Is Terrified Of Pineapples 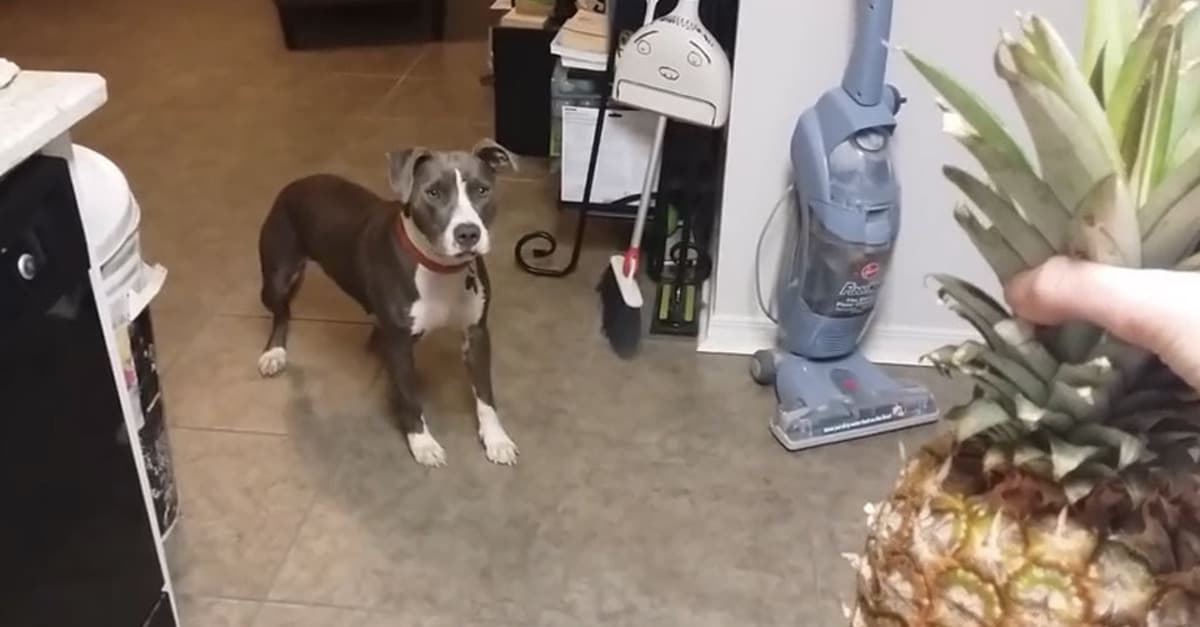 So my dog is internet famous.

In October of 2014 (October 27th, to be exact), I was driving to the store to pick up some chips and soda to take to a friend’s house. What I got was Stella. She’s a pit bull. At the time, she was a half-starved, terrified dog that was covered in fleas, worms, and cuts. Oh, and she also had conjunctivitis (fun times).

I can’t say exactly what her life was like before I came along, but I have a pretty good idea.

When I found her, she was skittering alongside the road trying to hide in a ditch. I slowly pulled the car over, took a few steps towards her, and beckoned. She promptly crouched down, started to shake in fear, and urinated.

But her tail was wagging ever so slightly.

She seemed caught between desperately wanting attention and fearing what might happen if she actually got it. After a little bit of time (and a lot bit of coaxing), she eventually approached me. We made friends for a bit; she sniffed around my shoes; I managed to get her into the car, and that, it would seem, was that.

Except, of course, the story doesn’t really end when the dog finds a happy home.

But she was slowly starting to figure things out. Then the pineapple happened.

I returned home from the store with groceries in one hand and my laptop and car keys in the other. As if it wasn’t enough trying to maneuver with all of this stuff, I had two super excited dogs bouncing about trying to get my attention.

And in case you aren’t already aware, trying to unpack groceries with a pit bull (Stella) glued to your side and a miniature pinscher (Guinness) wobbling about underfoot , well, it isn’t terribly easy. In fact, it's a poor life choice all round. So I sent the dogs to play outside while I took care of everything.

Once I was finished with the groceries and they came back in, I settled on the couch to get some work done. It wasn’t too long before I heard Stella barking, which is something that she never does anymore (at least, hardly ever). I got up to see what she was barking at, only to discover her staring fixedly at the counter and barking at (seemingly) nothing. I thought that she might be barking at a fly or maybe a treat. Anyways, it looked kind of funny. So I grabbed my camera and, well, you can see what happened from there…

Usually, when Stella is scared of something, I crouch down with whatever the item is and show it to her. She waddles over tentatively, gives it a sniff or two, and then goes on her merry way. For some reason, this didn’t work with the pineapple. Apparently, pineapples are all the horribleness.

Once it became apparent that she was going to bark until the pineapple met its demise, I turned off the camera so that I could help her deal with her utter (and totally absurd) terror. I had to call Guinness over and let him sniff the pineapple before Stella would even go near it. Guinness, if you are wondering, is 18 pounds. Stella is a little over 50 (size does not correlate with bravery, it seems).

I sat by the pineapple petting Guinness for a bit, and eventually Stella got jealous enough to overcome her fear. Just like she did the first night that I met her, she tentatively approached, hoping that it was okay. And it was.

Afterwards, I watched the video and uploaded it on Youtube for my friends to see. From there, Jezebel, Mashable, Daily Mail, Huffington Post, Metro, uproxx, distractify, MTV…pretty much everyone posted it.

And honestly, I am kind of surprised. I mean, yes, it’s amusing. But what I find most amusing is that, a month ago, she was wandering the streets, covered in cuts, urinating on herself when someone approached her, and now she is quietly sleeping on the couch, snuggling her chew toy, completely oblivious to her fame. So the video resonates with me on a much deeper level.

The story doesn't end when a dog finds a good home, because it's only part of the story.

Ultimately, that night I found Stella, she wasn't alone. Not really. There were (are) a million more animals out there just like her—animals who are terrified and starving, who still need someone. In fact, there's a lot more than a million out there. About 2.7 million healthy, adoptable cats and dogs—about one every 11 seconds—are put down in U.S. shelters each year.

Please, take a moment to let that sink in. By the time you finish reading this sentence, another lonely animal will have passed from this world because she couldn't find a home. Consider how many we lost in the time that it took you to read this article.

Now it's impossible to determine how many stray dogs and cats live in the United States, but estimates for cats alone range up to 70 million.

So I'd like to leave you with this simple point: If you liked this video, then please take some meaning from it. Because this matters. Get your pet spayed or neutered. Stop breeding. Recognize that there are millions of animals that are no longer able to survive because of the world that we've created. When you watch a cute pet video on the internet, think of all the half-starved, terrified dogs that are covered in fleas and worms, roaming our streets, looking for home. Remember that we have certain obligations to these animals (who have no choice but to live in the world that we created).

Hell, take that message from this even if you didn't like the video.

*Please feel free to take this post and reuse it or share it on your own blogs/websites/social media. Have at you.

I'd like to take a moment to give a shout out to the super awesome people at Pine Belt Veterinary Hospital and Kennel. They have been looking after Guinness for years, and they took awesome care of Stella when I brought her in. You should go and tell them how awesome they are on their Facebook page!