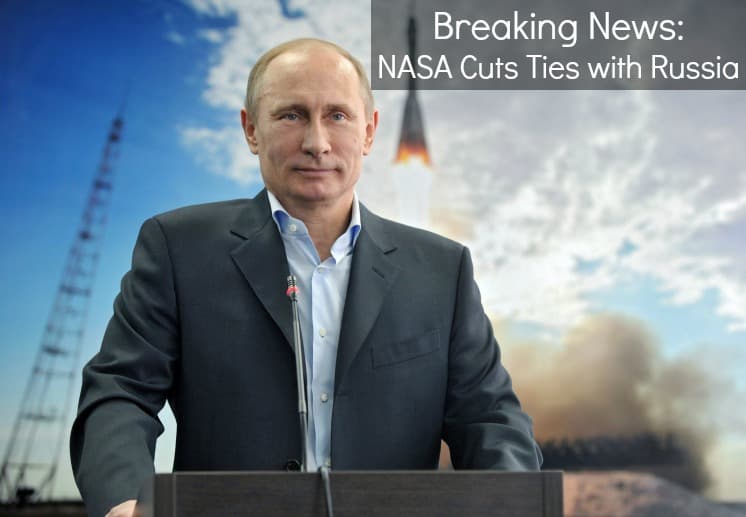 Yes, you read that right and, sadly, it isn't a joke. Starting today (April 2) NASA has suspended contact with representatives of the Russian government and not working with Russia's space program until otherwise stated. The only exception is in regards to the International Space Station, where NASA and Russia will continue to interact with each other. This decision is a response to the Russian invasion of Crimea and their violation of Ukraine's sovereignty.

In a statement they released today through Google Plus, NASA stated:

"Given Russia's ongoing violation of Ukraine's sovereignty and territorial integrity, NASA is suspending the majority of its ongoing engagements with the Russian Federation.  NASA and Roscosmos will, however, continue to work together to maintain safe and continuous operation of the International Space Station. NASA is laser focused on a plan to return human spaceflight launches to American soil, and end our reliance on Russia to get into space.  This has been a top priority of the Obama Administration’s for the past five years, and had our plan been fully funded, we would have returned American human spaceflight launches – and the jobs they support – back to the United States next year.  With the reduced level of funding approved by Congress, we’re now looking at launching from U.S. soil in 2017.  The choice here is between fully funding the plan to bring space launches back to America or continuing to send millions of dollars to the Russians.  It’s that simple.  The Obama Administration chooses to invest in America – and we are hopeful that Congress will do the same."

Earlier today, an internal memo was leaked from NASA that stated:

Given Russia's ongoing violation of Ukraine's sovereignty and territorial integrity, until further notice, the U.S. Government has determined that all NASA contacts with Russian Government representatives are suspended, unless the activity has been specifically excepted. This suspension includes NASA travel to Russia and visits by Russian Government representatives to NASA facilities, bilateral meetings, email, and teleconferences or videoconferences. At the present time, only operational International Space Station activities have been excepted. In addition, multilateral meetings held outside of Russia that may include Russian participation are not precluded under the present guidance. If desired, our office will assist in communication with Russian entities regarding this suspension of activities. Specific questions regarding the implementation of this guidance can be directed to Ms. Meredith McKay, [deleted contact information], in our office.

We remain in close contact with the Department of State and other U.S. Government departments and agencies. If the situation changes, further guidance will be disseminated.

So, what does this all mean?

1) NASA won't communicate with Russia beyond things concerning the ISS and this suspension.

2) NASA will still participate in international conferences, seminars, and such even if Russia attends.

3) NASA will still use Russia's Souyez rockets to get U.S. Astronauts to and from the ISS (though, there has been a lot of concern about America's reliance on a foreign government for all of our manned-space ventures. NASA's G+ statement basically said they were working on a resolution to that concern).

Some other nuggets of information include:

1) There are currently two Americans on-broad the ISS. The next batch of crew members are expected to launch from Russia on April 9, one of which will be an American.

2) A NASA scientists spoke to "The Verge" and complained, "NASA's goals aren't political. This is one of the first major actions I have heard of from the US government and it is to stop Science and Technology collaboration. ... You're telling me there is nothing better?"

As new information becomes available, we will let you know and update.