Bennu: NASA to Get Sample From Asteroid 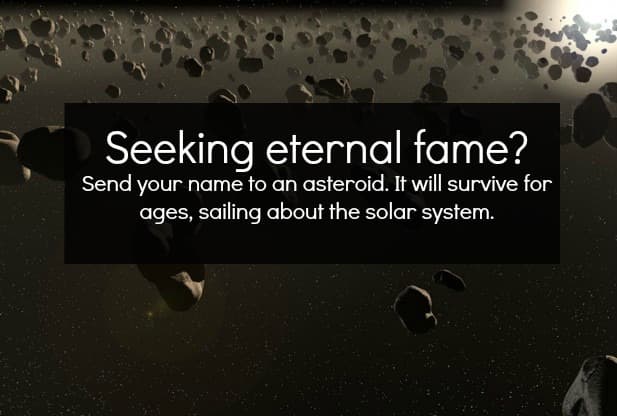 NASA is planning to launch a satellite mission to an asteroid and you have a chance to send your name along with it!

The satellite mission is going to study an asteroid named Bennu, and return samples back to Earth. The satellite will spend about 505 days around the asteroid, studying it from up close (from a distance varying from 5 km to 0.7 km), and collect at least 60g of samples from the same. The asteroid itself is about 1760 foot (500 meter) wide, or roughly the size of four football fields.

The mission is named Origins-Spectral Interpretation-Resource Identification-Security-Regolith Explorer, or OSIRIS-REx for short. It is part of NASA’s New Frontiers Program, which is aimed at exploring our solar system “with frequent, medium-class spacecraft missions that conduct high-quality, focused scientific investigations designed to enhance our understanding of the solar system”, according to the program’s website.

As part of this program, the OSIRIS-REx’s mission objectives include:

In addition to studying the nature and history of the asteroid’s constituent minerals and organic material, the mission will also attempt to glean information about the geological history of the asteroid – how it could’ve formed roughly 4.5 billion years ago when our solar system was just taking its baby steps in the universe.

It will also compare the result for this carbonaceous asteroid with those of other, similar asteroids observed from the Earth, as a sort of “calibration” of the Earth-based observations. To put it simply, suppose you make a measurement of some property ‘p’ (say, the mass) of the asteroid from Earth, and say, the value is ‘m1’. And then you make the same measurement of the same (or similar) object from up close. Suppose this time, the measurement comes out to be ‘m2’. This tells us that if we measure something as ‘m1’ from Earth, while it’s actual, more accurate value would be ‘m2’. This is what is generally referred to as “calibration”.

Another very important objective of the mission is to accurately measure the “Yarkovsky effect” – the effect that an asteroid (and other rotating bodies) experience, as they are hit by high energy, momentum-carrying photons from the Sun. Due to the body’s rotation, as well as its uneven, irregular shape, this effect can cause changes in the object’s trajectory. Although the effect itself is small, but out there in space, in the absence of other external forces (like friction), the effect can be substantial as it accumulates over time (considering these are “astronomical” times – millions and billions of years). Studying this effect is a key as scientists try to devise strategies to protect our planet from stray asteroids. Having more information about this effect can help them predict asteroid trajectories, and even help them use it to their advantage by exposing an incoming asteroid to artificial radiation, in an attempt to move it out of Earth’s orbit. Not only that, this information could be very useful for the upcoming asteroid-capture mission being planned by NASA.

What’s In It For Me…

To promote the mission, as well as general science outreach, OSIRIS-REx, in association with The Planetary Society, is giving space enthusiasts a chance to send their name to the asteroid. The names will be etched on a microchip to be sent with the satellite, and will return to Earth with the return sample. In addition, a copy of the names will also remain with the main satellite that will stay back with the asteroid. You didn’t think we’ll leave it out there in the cold, alone. Specially, since it’s taken roughly 4.5 billion years for something to get so close to it (poor Bennu). Well, in a matter of speaking; we don’t actually know that  it has been alone– it’s entirely possible the asteroid has had close encounters with other heavenly bodies.

To reach for the asteroid, all you have to do is fill out the form and you are all set!

They even give you a certificate so that you can boast about your achievement! Let me share and boast myself: