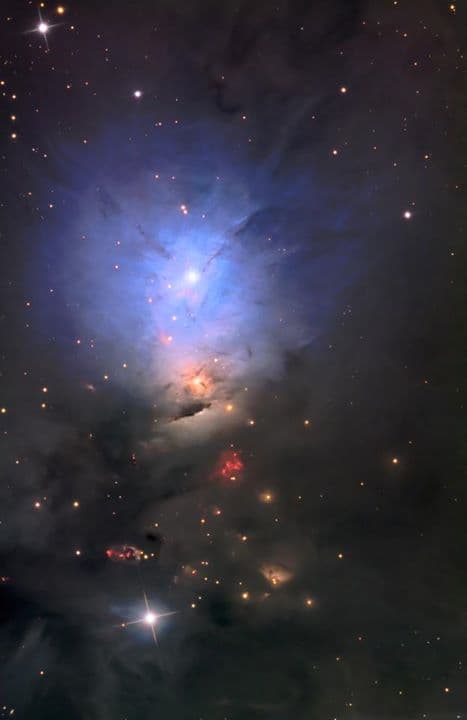 This is a beautiful, but chaotic image of the reflection nebula known as NGC 1333, which lies about 1,000 light-years from Earth in the constellation of Perseus.

In the center of this deep space photo, thousands of baby stars are being born, but their light is obstructed by thick clouds of dust -- thus classifying it as a member of the dark nebula family. In the same token, the clouds that are responsible for blocking the light are also reflecting the optical light we see here. This, in turn, is responsible for the nebula's predominantly blue glow, which makes NGC 1333 part reflection nebula as well.

Other than the striking blue hue appointed to the region by the newborn stars, this nebula also is also home to red-hued jets that peek into the image from the bottom, center. These jets are made up of ionized gases, which are energized by the ultraviolet radiation blasted out into the interstellar medium through stellar winds from the proto-stars. Overall, the jets give the region  characteristics of  emission nebulae as well.

Lastly, astronomers have found around 50 brown-dwarfs within the nebula, which is a larger part of the Perseus molecular cloud. Also nearby is the Rho Ophiuchi cloud complex, which contains about 3,000 solar masses of material. One such member of the brown-dwarf family belonging to the nebula is six times more massive than Jupiter, making it one of the smallest free-floating objects currently known of.