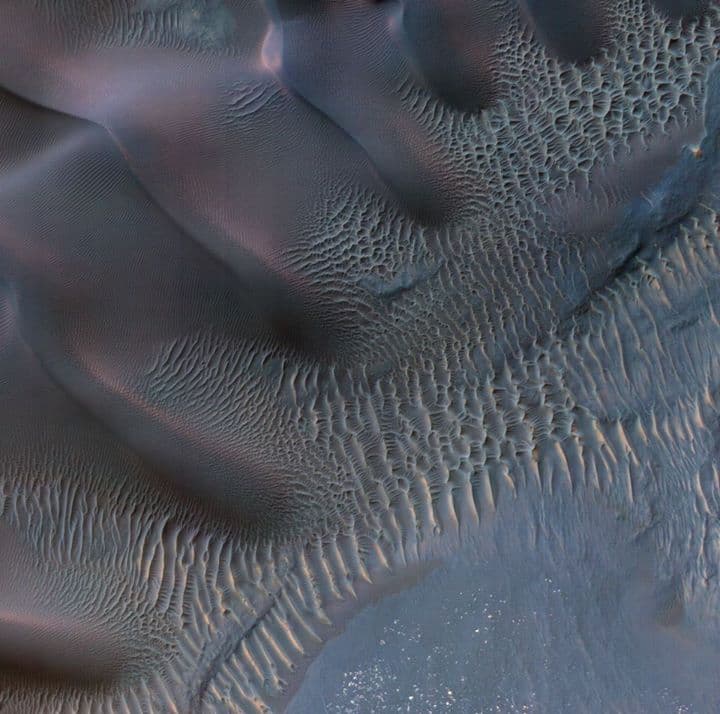 Mars is a treasure trove of beautiful - albeit alien - scenery. The dunes of Noachis Terra, which are found inside an impact crater in the southern landmass, are no exception. This enhanced-color image was taken by the Mars Reconnaissance Orbiter’s High Resolution Imaging Science Experiment camera – the image itself spans about six-tenths of a mile (or about 1 kilometer).

The Mars Reconnaissance Orbiter (MRO) arrived at the Red Planet on March 10, 2006 and immediately began preparations for its primary mission; to survey the Martian surface and locate landing sites for future missions. The MRO has been instrumental in helping scientists choose these landing sites, as is the case with the Phoenix and Curiosity missions. The orbiter was originally scheduled to operate for two Earth years. However, even after nearly 7 years, this spacecraft is returning amazing data (not to mention, some awesome pictures) of our little red friend.

You can see a high resolution image here. Or, check out our article that revels in the beauty of Mars' many strange surface features.