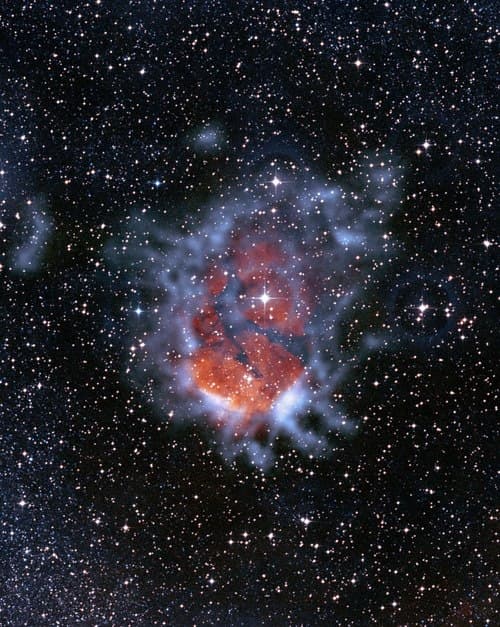 Located approximately 4,300 light-years from Earth in the constellation of Scorpius, RCW120 (also known as Sh 2-3 or Gun 58) is an emission nebula that, to some, heavily resembles a glowing emerald in the sky.

As you can see, this is a region full of hot gas and dust, which are illuminated by the light of "O" type stars (the most massive stars currently known to exist). The ring of dust shown in this picture would not be visible like this to human eyes, but it can be seen here because it was taken in infrared by Spitzer's infrared detectors. In the center of the ring lies several more massive "O" type stars. The stars in question tirelessly work to bombard the surrounding gas with ultraviolet radiation, thus causing the material to become ionized.

The "galactic bubble" is thought to contain the mass of at least 8 suns. Astronomers think that embedded inside of it, there lies an embryonic star currently in the process of growing. Depending on how it evolves in the coming years, it might grow to become one of the biggest and brightest stars in the galaxy. (It shouldn't be too hard, as there is an additional 2,000 solar masses worth of gas and dust for the baby star to feed on to grow!)

This image is a three-color composite showing images of the nebula taken in infrared by two instruments on-board the Spitzer Space Telescope. RCW 120 can be found ever so slightly above the flat plane of the Milky Way.