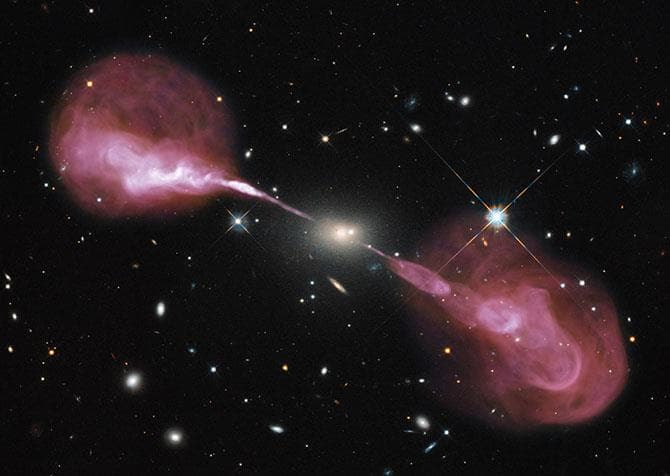 This is the elliptical galaxy known as Hercules A (formally designated as 3C 348). Other than being visually stunning, this galaxy is notable because it emits nearly a billion times more radio waves than our sun does, making it one of the brightest radio-emitting objects in the constellation of Hercules.

The super-massive black hole that lies at the heart of Hercules A, which is more than 2 billion light-years away, is responsible for manufacturing the spectacular jets seen here. Suffice to say, the black hole is powerful and quite massive, as is the galaxy in general. Compared to the Milky Way, it's 1,000 times more massive -- with its central black-hole containing the mass of 2.5 billion suns (this makes it approximately 1,000 times massive than the black-hole in the center of our galaxy, Sagittarius A*)

This image is a composite, showing Hercules A in optical light from the Hubble Space telescope's Wide Field Camera 3, and the recently upgraded Karl G. Jansky Very Large Array (VLA) radio telescope. The VLA revealed the enormous jets that are typically invisible when viewed at optical wavelengths. They are composed of high-energy plasma beam, capable of shooting superheated material off into interstellar space at speeds close to the speed of light. The jets extend almost 1.5 million light-years in width and are only visible using special filters, but this image portrays how they would look if we could see them.