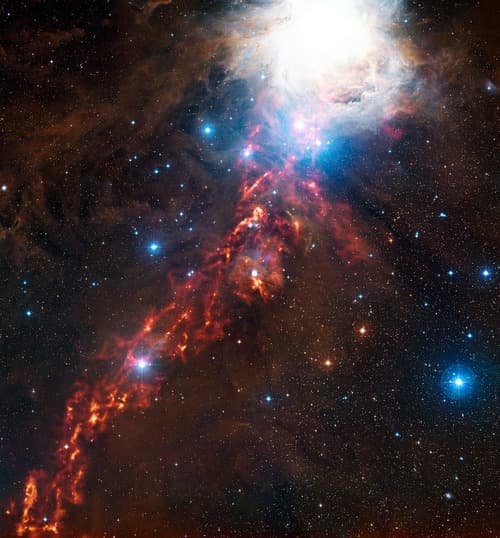 The great Orion nebula is one of the most celebrated celestial regions in our galaxy. With hundreds of images of it floating about, it's difficult to capture an image of it from a perspective that is different and new, but this recently-image does just that.

Taken by the ESO's APEX telescope, this image captured the fiery ribbons of Messier 42, which reside in the Orion Molecular Cloud -- some 1,350 light-years away (in the constellation of Orion). In the upper right portion of the image is the Orion nebula itself, one of the largest (and closest) star forming regions in our galaxy.

Interestingly, looking at this image, one would likely assume that the distinct orange columns are very hot, when in fact, they are quite cold at temperatures just a few degrees above absolute zero. They are composed almost entirely of small grains of interstellar dust clouds, which are notoriously opaque to visible light, making it difficult to see the star-forming activity going on inside of it. However, when viewed at different wavelengths, astronomers have the opportunity to peek inside the stellar nursery.