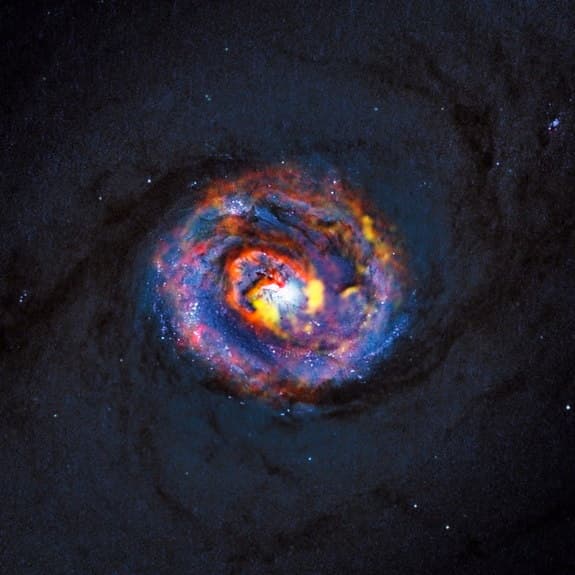 This image, which depicts a spectacularly colorful galaxy, is red hot (both literally and figuratively). It was just released to the public, thanks to the European Southern Observatory's (ESO's) "ALMA radio telescope." The ALMA telescope is capable of peering through the veil of dust and gas to see light emitted at millimeter wavelengths.

The galaxy in question, which is known as  NGC 1433, is a barred spiral galaxy. It can be found approximately 30 million light-years from Earth (in the constellation of Horologium). Unlike  typical galaxies (when viewed at optical wavelengths), here, we can see a myriad of different things that are going on. Like, for instance, we see an amazingly large outflow of material emitted from the supermassive black hole located near the heart of the galaxy.

This is particularly notable when viewing the galaxy's poles - where superheated jets of material leave the black hole, before bleeding a trail of molecular material more than 150 light-years into the surrounding region. While this may sound like a rather large stream, it, in fact, is one of the smallest jets we currently know of.