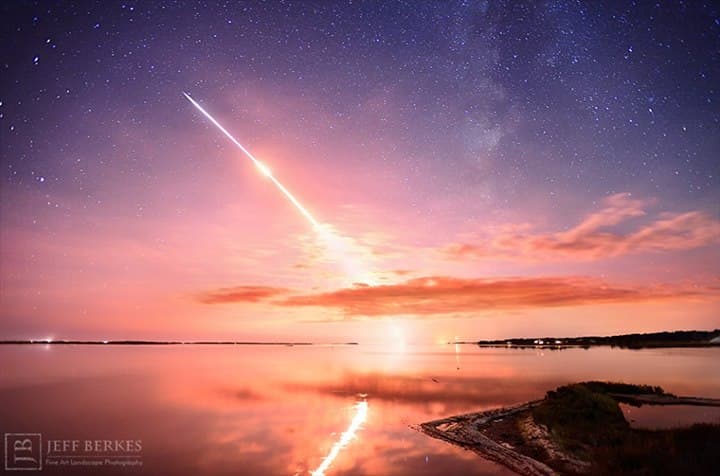 This stunning image was captured on September 6th, when the Minotaur V rocket launched from Wallops Island, Virginia. On-board the rocket was the latest probe sent to explore the moon, called the "Lunar Atmosphere and Dust Environment Explorer" (also known as LADEE).

Jeff Berkes watched diligently as both took off from NASA's Wallops Flight Facility - leaving behind a brilliantly bright rocket trail. The trail was easily discernible, despite the image being taken from a vantage point overlooking Sinepuxent Bay, Maryland (an urban area prone to light pollution).

The finished product is the result of a 35 second exposure, which captured the initial launch streak and the ignition flare. However, the defining characteristic of the image would have to be the reflection seen in the Atlantic Ocean.

LADEE will enter into a highly elliptical orbit around Earth - before making its way into orbit around Luna (Earth's moon). Once it's there; it will embark on a mission to study the remnant of the lunar atmosphere. In addition to collecting information about the effects of lunar dust.