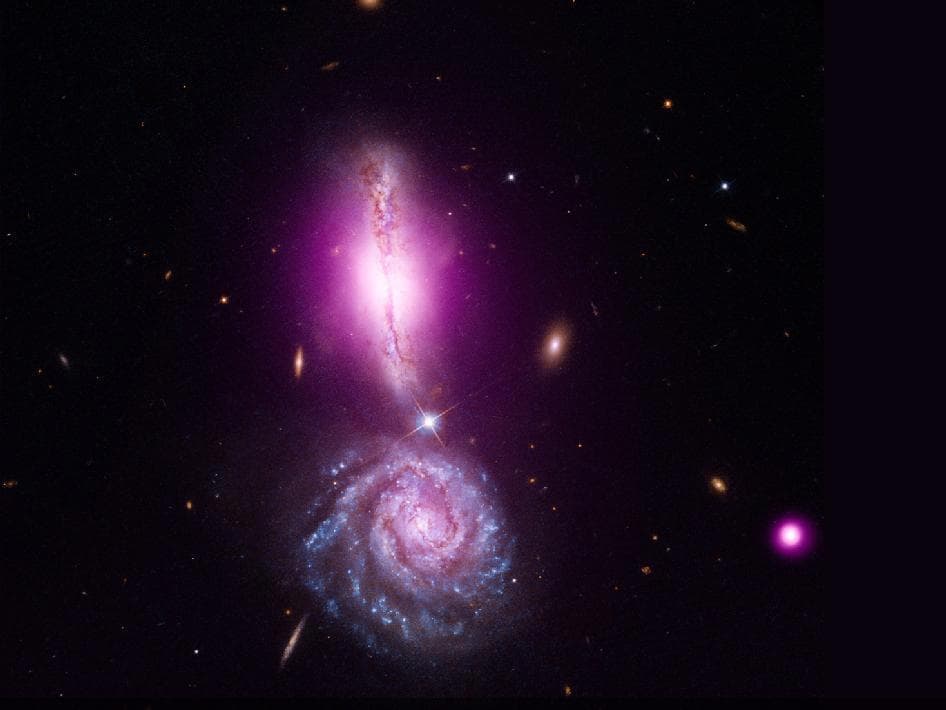 This picture is a composite that combines optical data from both the Hubble Space Telescope (seen in green, blue and red) and the Chandra X-ray Observatory (pictured in purple)

These two galaxies, which are traditionally known as Arp 302, are located approximately 450 million light-years from Earth. As you can see, these two photogenic spiral galaxies are in the initial stages of merging into one larger elliptical galaxy, which gives astronomers a front row seat to observe the ultimate fate of the Milky Way when it inevitably collides with its nearest neighbor, the Andromeda galaxy, in about 4 billion years.

The two galaxies emit a startlingly large amount of infrared radiation. Said emissions typically release hundreds of times more radiation than the amount emitted by typical galaxies, potentially classifying them as luminous infrared galaxies. These galaxies are extremely interesting for astronomers to monitor. Thanks, in small part, to the fact that the cause of the large emission is largely unknown. It's believed that at the center of VV 340 North (top), there is a supermassive black hole that is steadily growing in size, yet it's obstructed from our view due to surrounding gas and dust particles. Another theory suggests that the galaxies are subject to intense bursts of star formation similar in mechanism to open and globular clusters.

You can find further information here.