Astronomers find Evidence of An Impact Outside Our Solar System

There’s a saying about life, “only two things are for sure: death and taxes.” Out there in the cosmos, there is a lot of uncertainty, but we can conclude the following things: stars live, they die, and if they have planets, those planets will be faced with destruction at some point along their evolutionary timeline. With our planet, we’ve been dealt some pretty crushing blows, from killer asteroids to an-impact-to-beat-all-impacts (the one that eventually formed our moon some 4.5 billion years ago).

Astronomers have long known that some kind of a planetary body collided with Earth very early on, ejecting the material that coalesced into the moon; an assertion they confirmed by comparing rock samples collected on the moon to those collected on Earth. However, some details are still sketchy mostly because we have nothing to compare it to, but word is, astronomers have found evidence of the very first planetary impact outside of our solar system.

The study, which was published in the newest edition of “Science,” was led by Huan Meng (a graduate student from the University of Arizona in Tucson). It asserts that, using NASA’s Spitzer Space Telescope in conjunction with various ground-based observatories, they’ve directly witnessed the aftermath of what might prove to be a collision between two proto-planets that circle a star about 1,140 light-years from Earth, dubbed NGC 2547 ID8.

The star itself is similar to the Sun in many ways, especially where its size and composition are concerned. However, it’s substantially younger than our parent star is. It hasn’t even reached the 50 millionth milestone yet. 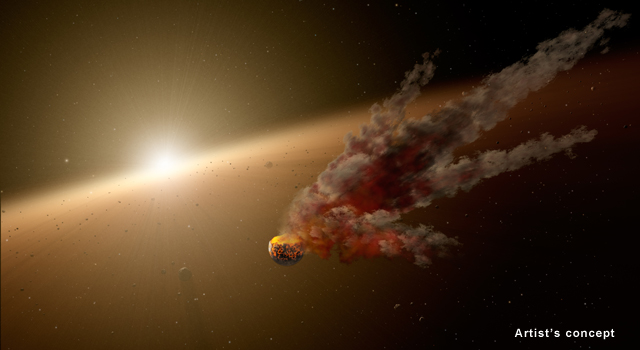 “This is the first detection of a planetary impact outside of our own solar system,” the author of the study continued, “It provides a glimpse into the earliest era of the formation of our own solar system, since NGC-2547 ID8 is the same mass and size as our parent star, and, at just 35-million years old, the same age our sun was when its planets were accreting from the material that circled it.”

The recent discovery stems from older observations, which revealed that the parent star has an extraordinarily dusty protoplanetary disk encircling it, but there appears to be stark variations in the spectra of its infrared light. This suggested that something else might be going on within the disk, but contrarily to the norm. In astronomy,when something is out of sight, it’s not out of mind.. It’s a reason to investigate.

Meng and his team decided to take that closer look in anticipation of witnessing ongoing asteroid collision activity — something believed to be a rite of passage for all terrestrial bodies (at least according to our planetary formation models). Instead, using Spitzer, they started making recurrent observations back in 2012, sometimes every day, until they found something a lot more impressive.

To simplify,“We think two big asteroids crashed into each other,” said Meng, “creating a huge cloud of grains the size of very fine sand, which are now smashing themselves into smithereens and slowly leaking away from the star.”

They can’t pinpoint the exact time of the collision, but they do know that it took place within a five-month window between the observations made in 2012 and those taken later on in 2013 (perhaps about 2 years back). Even though they missed directly witnessing the event, the were able to still see the vibrant infrared glow generated by the fine dust particles known to exude after similar cataclysmic events.

After inputting the level of infrared radiation they spotted in the system, they rendered a computer simulation that indicated the increase must be the result of two moderately large protoplanets (think of them as the seeds from which all planets grow, including our own blue marble) crashing into each other at high-speeds. “We are watching rocky planet formation happen right in front of us,” co-author George Rieke emphasized. “This is a unique chance to study this process in near real-time.” 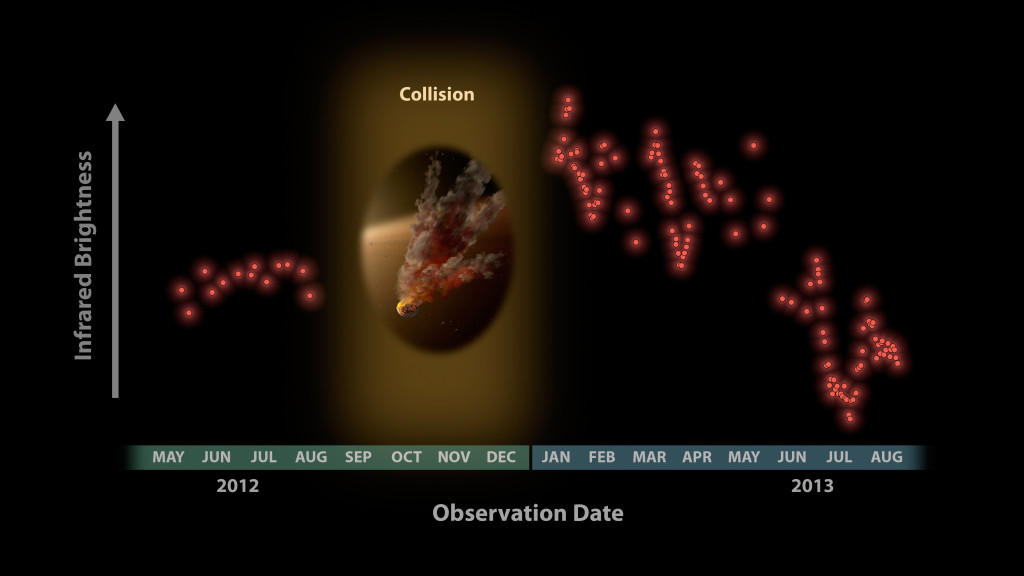 Meng went on to explain why this is the only logical conclusion to come to, saying that such an event would catapult a huge chunk of incandescent, vaporized rock — along with thick clouds of thin, but condensed silicate spherules (or microscopic sphere-shaped mineral grains that are created at high temperatures) — into the surrounding medium. “I can’t imagine something else,” Meng stated, “that could produce so much dust just within four months.”

The team plans to keep a close watch on the region for the foreseeable future, but that will soon get tricky, even with Spitzer at their disposal. “We not only witnessed what appears to be the wreckage of a huge smashup, but have been able to track how it is changing — the signal is fading as the cloud destroys itself by grinding its grains down so they escape from the star,” said Kate Su of the University of Arizona (another co-author of the study).

Regardless, this discovery will certainly help astronomers in a number of ways, both big and small.