Are More Strict Science and Math Requirements Good for Students? 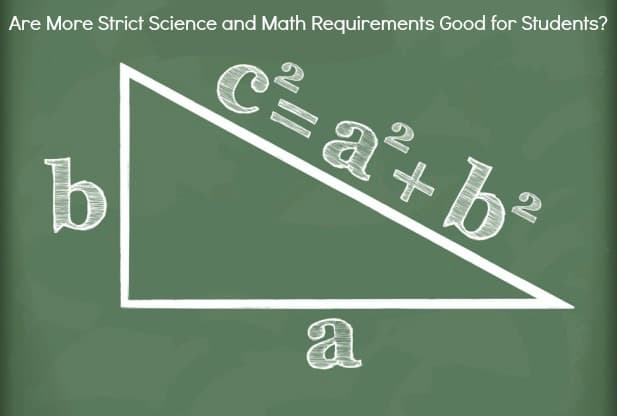 American high schools have come under fire for having science and math standards that are too lenient. One just has to take a look at the plethora of studies that have been done to see that something is lacking in the American education system. When one in four Americans believe the Earth orbits the Sun, something needs to be done and it has led to a real problem with education in the States. One of the responses to this has been making science and math requirements for high school graduation more intense.

Normally, people think this is good. More math and science classes sounds like a good thing, but a study published in Educational Researchers shows that might not be the case. A group from Washington University found that harder academic courses is driving some students to drop out of high school. Andrew D Plunk, one of the authors of the paper, said, "There’s been a movement to make education in the United States compare more favorably to education in the rest of the world, and part of that has involved increasing math and science graduation requirements. There was an expectation that this was going to be good for students, but the evidence from our analyses suggests that many students ended up dropping out when school was made harder for them."

The new policies affect sex, race, ethnicity, and other factors similarly. Hispanic and African Americans saw dropout rates increase by about 2.5 and 2 percent respectively under the new, more stringent guidelines. William Tate, the dean of the Graduate School of the Arts and Sciences stated, "Going forward, state policymakers must understand that students can’t take more math and science courses if they quit school." He has also spoken out against the new requirements, saying that students were not prepared to pass the more rigorous courses.

On the flip side, the study also found that students who passed the more strenuous courses were more likely to earn college degrees. So, the more rigorous requirements do their job for the students who pass, it just causes more to drop out along the way.

Regardless of the educational system we try to implement, one this is clear. A "one-size-fits-all" education doesn't work. Why don't the new education requirements push the United State's education into the same realm as other first world countries? It's probably a combination of factors; hard to understand textbooks, unprepared teachers, lazy students, parents who care more about their kids getting good grades than an education, non-modernized and old school buildings, and poor implementation of new education paradigms. This isn't a "one-size-fits-all" problem, and there won't be a "one-size-fits-all" solution.

What are your thoughts?