Astronomy Photo of the Day: 7/25/14 - The Whirlpool Galaxy As You've Never Seen it Before 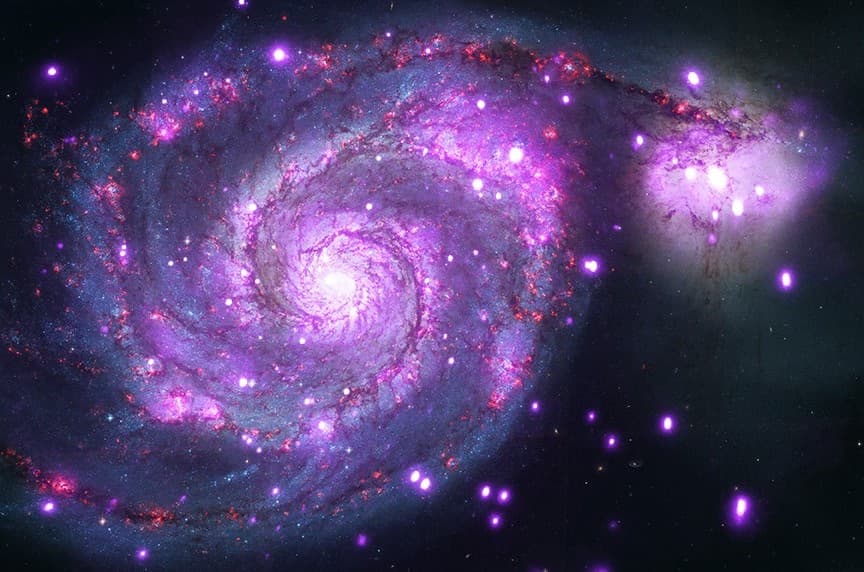 The Whirlpool galaxy (also known as Messier 51) is one of the most instantly recognizable galaxies known to man, and for good reason too. I mean, just look at it. It has all of the makings of a spectacular sight, with its glorious, brightly-colored spiral arms, its big , accentuated central core, and the red patches that signify newly-formed stars.

However, the image below shows you the galaxy in a whole new light (literally and metaphorically speaking). Using the Chandra X-ray Observatory, astronomers were able to pair the hidden characteristics of the Whirlpool galaxy with those that are apparent at optical wavelengths.

In the case of M51, we can see that the galaxy is a heavy source of x-ray emissions. Astronomers assert that the x-rays come from compact binary interactions involving two dense bodies (like pulsars, neutron stars and even black holes). When said objects siphon material from their companion, the temperature of incoming matter rises exponentially, spitting out x-rays in return.

M51 can be found more than 30 million light-years from Earth in the constellation of Canes Venatic. Chandra data can be seen in purple, while optical light was collected by Hubble (seen in green, red and blue).