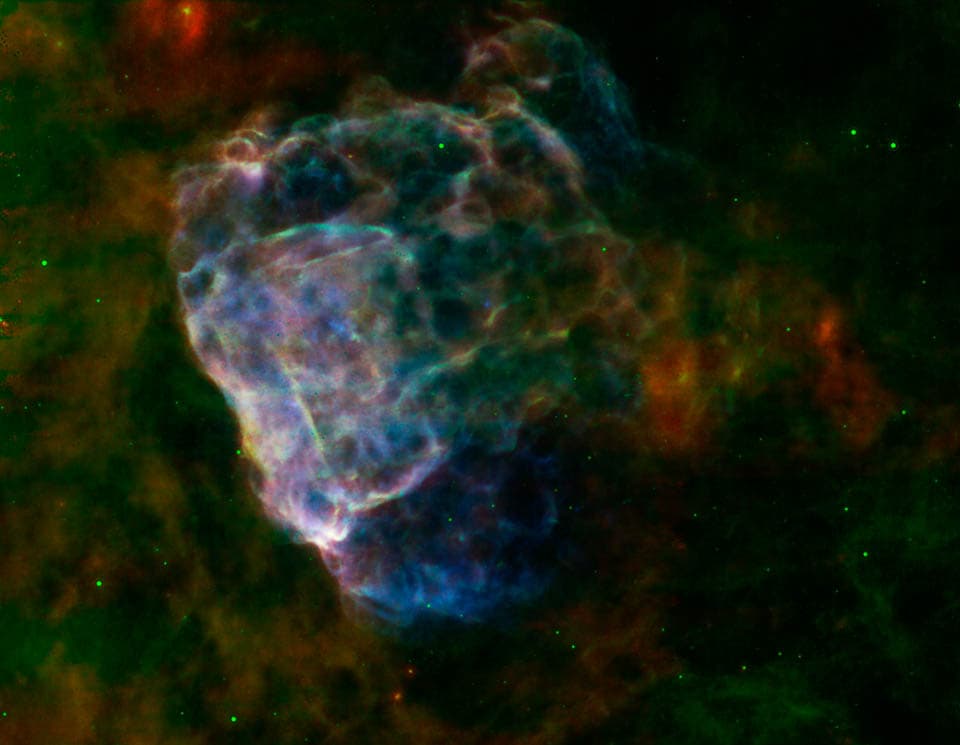 Earlier this year, in modern-day Israel, archaeologists unearthed the oldest bottle of wine known to man. Said bottle of wine was found beneath the rubble of an ancient palace that was destroyed by a natural disaster, some 3,700 years ago. At the same time in which this wine was being brewed, the light from a 7,000-year-old explosion had traversed all of the intervening spacetime, finally making its mark on our sky.

Now, astronomers have pointed their telescopes toward this region and studied the remnant more thoroughly than ever before. Now known as Puppis A, they have learned that, even after all of this time, the object's shockwave still spans an impressive 10 light-years across. However, this isn't your ordinary shockwave. Technically. it's categorized as an irregular one.

We can see why in this image of Puppis A, which is a blend of images taken of the supernova remnant at various wavelengths. X-ray data was gathered by Chandra and XMM-Newton, while Spitzer collected the infrared light.

Together, they paint a clear picture of remnant's internal structure, and how the warm dust (pictured in green and red) and hot gas (seen in blue) clash. This image also shows specific regions where both materials intersect, places that are a bit brighter (and more demurely colored) than their surroundings.

Per NASA, "Infrared data from Spitzers multiband imaging photometer (MIPS) at wavelengths of 24 and 70 microns are rendered in green and red. X-ray data from XMM-Newton spanning an energy range of 0.3 to 8 keV (kiloelectron volts) are shown in blue."