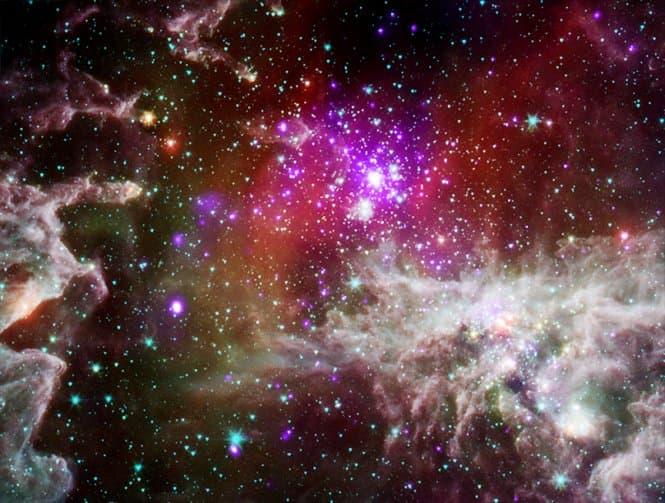 Pacman—a figure from one of the most iconic games of all time—bears some resemblance to this star forming region when viewed at certain wavelengths. Formally called NGC 281, the Pacman nebula can be found about 9,200 light-years from Earth in the Cassiopeia constellation (more specifically, you can find it within the Perseus Spiral Arm of the Milky Way galaxy).

In this image—captured using the full capacity of the Spitzer Space Telescope—the resemblance isn't too apparent. That's because, at the infrared wavelength portion of the electromagnetic spectrum, we are essentially mapping the thermal signature of the region, which includes gas and dust content.

Unlike most of its dusty counterparts, NGC 281 is unusual in the fact that its location in respect to the plane of our galaxy doesn't hinder our view of the cluster—known as IC 1590—but it enhances it, and allows us to see how the high-mass stars brewing in the center are taking shape.

Finally, in addition to the primary nebula and the cluster. NGC 281 also hosts at least one bok globule, dubbed Barnard 1. (You can find a larger image here)