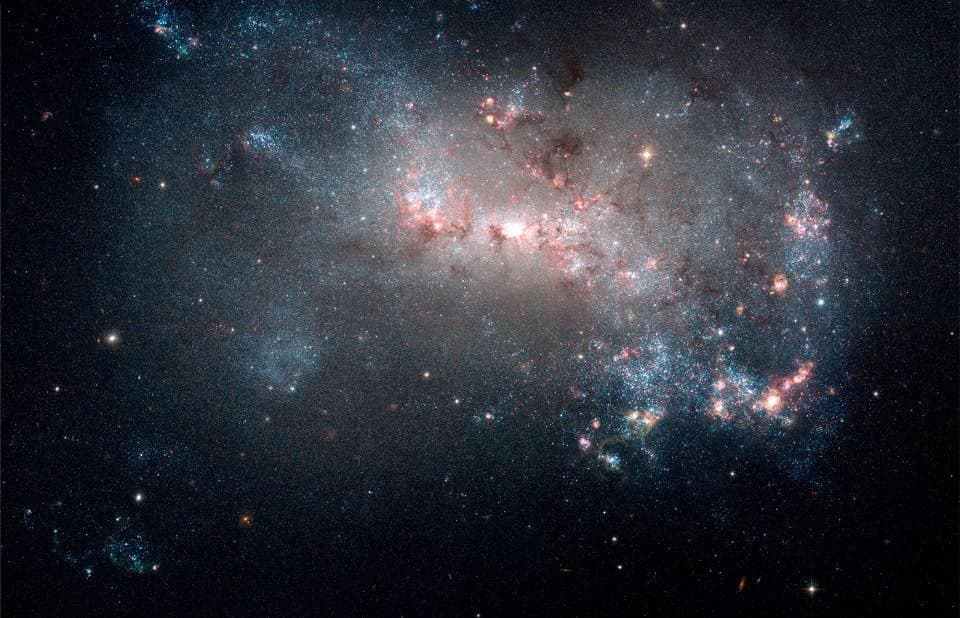 This is the dwarf galaxy NGC 4449, it is 19,000 lights-years across and about 12.5 million light-years from Earth, it can be found in the constellation of Canes Venatici. The galaxy, which is classified as an irregular galaxy, is a very active star-forming galaxy, though, at the moment, it only contains several billion stars (I know what you're thinking.. "is that all?")

The first object to note is the galactic core. Near the center, you’ll see a bright white knot of stars; that is the core. Immediately to the left of the core is a dark cloud, it is a dense pocket of gas and is likely forming new stars.

On star formation, this galaxy is going crazy. It’s popping out new stars faster than *insert hip social reference here*. A good example is a line of star formation occurring right below the center-right edge of the image. Often, like with this galaxy, star-formation is accompanied by a bright pinkish glow that is created when hydrogen is heated by the intense radiation emitted from stars.

The blue areas are host to various high-mass stars, which live only a few hundred million years or so (small peas on a galactic scale) before they explode in supernovae events. There is also a large cluster of these massive, hot young stars scattered throughout the galaxy.

Download a larger image here. Or, you can tour the region here.