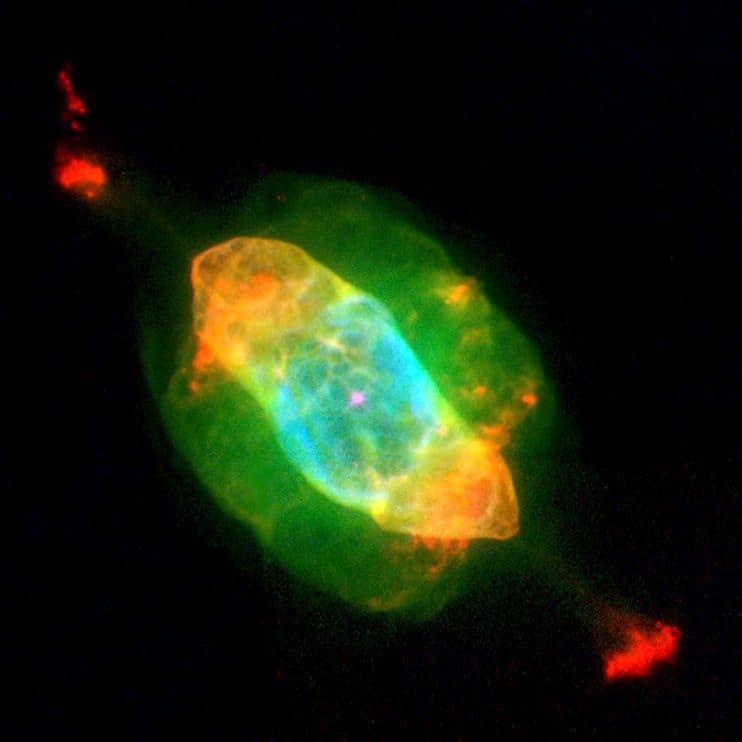 A planetary nebula forms after a Sun-like star reaches the end of its lifetime. Once it sheds its outermost layer of gas, said gas twists into complex filaments that resemble different things. However, when viewed from afar (say, through a telescope), they often resemble planets.. hence the name "planetary nebulae." This particular object, called NGC 7009, is a textbook example of one. So much so that it has earned the moniker of the "Saturn Nebula" (because it looks just like Saturn through a telescope).

NGC 7009, like other objects of its kind, has a bright central star that powers it. It can be seen straight the center of a "dark cavity bounded by a football-shaped rim of dense, blue and red gas." The NASA/ESA collaborative team behind Hubble explain further:

"The cavity and its rim are trapped inside smoothly-distributed greenish material in the shape of a barrel and comprised of the star's former outer layers. At larger distances, and lying along the long axis of the nebula, a pair of red 'ansae', or 'handles' appears. Each ansa is joined to the tips of the cavity by a long greenish jet of material. The handles are clouds of low-density gas."

NGC 7009 can be found about 1, 400 light-years away from Earth in the constellation of Aquarius (though its distance has been a bit difficult to determine with accuracy). The image attached was captured using Hubble's 'Wide Field and Planetary Camera 2' on April 28th, of 1996.