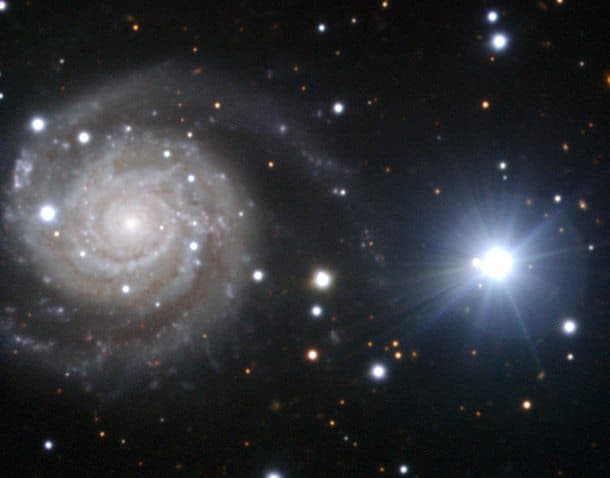 It's not every day that we have an opportunity to see a photo-bomb of galactic proportions, which is exactly what we see with this image, captured by ESO's "Very Large Telescope" (VLT).

The spiral galaxy in this image, known as NGC 3244, is located some 90 million light-years from Earth, in the constellation of Antlia. It's one of the more well-studied galaxies we know of thus far, mostly due to the fact that a supernova remnant was first discovered back in 2010 -- now formally known as Supernova 2010ev (SN 2010ev). This particular remnant is pretty unremarkable, coming in with an apparent magnitude of just 14, making it more than 1,000 times too dim to be seen with the naked eye, but still substantially brighter than similar remnants found in 2010.

The bright object on the right is not a distant galaxy, but a star that is actually located in our galaxy -- thousands of times closer to the galaxy pictured on the left. The brightness of the star in question, known as TYC 7713-527-1, is somewhat of an optical illusion. Its relative distance from our corner of the cosmos compared to that of NGC 3244 contributes to this illusion.

The galaxy is also sometimes known as The Czech President’s Galaxy. Named as such due to the fact that the President of the Czech Republic, Václav Klaus, helped take the image.