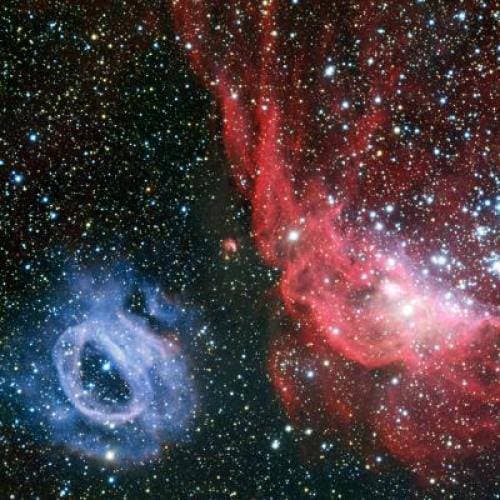 This spectacular image captures the essence of one of the Milky Way's satellite galaxies, - the Large Magellanic Cloud - along with two unlikely nebulae located side-by-side. The pinkish nebula on the right, known as NGC 2014, is an ionized gas cloud comprised almost entirely of hydrogen. A cluster of stars are responsible for the characteristic glow accompanying the ionization. When the stellar winds pierced through the galaxy, hydrogen atoms were stripped of their electrons when they came in contact with  ultraviolet radiation streaming from young, energetic stars . The clouds of gas were then reborn when the hydrogen and their electrons recombined.

Its partner (pictured on the left) is NGC 2020. Its bubble-like cavity was naturally carved out as gaseous material was carried away by stellar winds.In contrast to NGC 2014, the bluish hue  seen here is the work of one single, massive, unstable star called a Wolf-Rayet star. Instead of acting as an agent for the ionization of hydrogen, this star is responsible for ionizing surrounding oxygen atoms. (Hence the variation in color)

The Large Magellanic Cloud is located only 163,000 light-years from our galaxy, but its far smaller. It has merely 1/10th of the overall mass of the Milky Way. It is also home to some of the most famous nebulae in our night sky, including the Tarantula nebula.