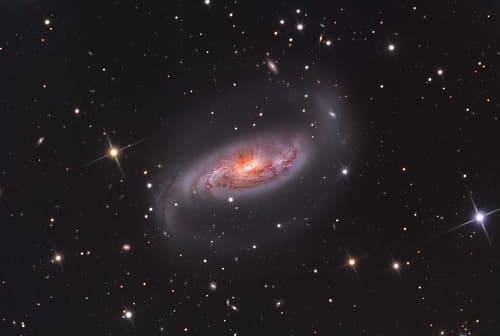 It might not look like it, but this serene and stunning galaxy, which can be found about 40 million light-years from Earth in the Columba constellation, is in the midst of a tumultuous period in its evolution, perhaps after having experienced a close encounter with a neighboring galaxy, dubbed NGC 1792.

There are several interesting features of the galaxy, dubbed NGC 1808, that give the hypothesis credence, which include the peculiarly shaped central region and its misshapen disk; the powerful hydrogen outflows leading away from the core and the wisps of material that circle the galaxy (all of these things point to some kind of a gravitational encounter),

The coloring is meant to be more pronounced to help highlight key details of the 35,000 light-year-long galaxy. The huge spots of blue are places where star forming activity is going down (the bluish color itself is the result of ionization) while the faint, reddish regions are representative of interstellar dust clouds, which hide newly-born stars from sight.