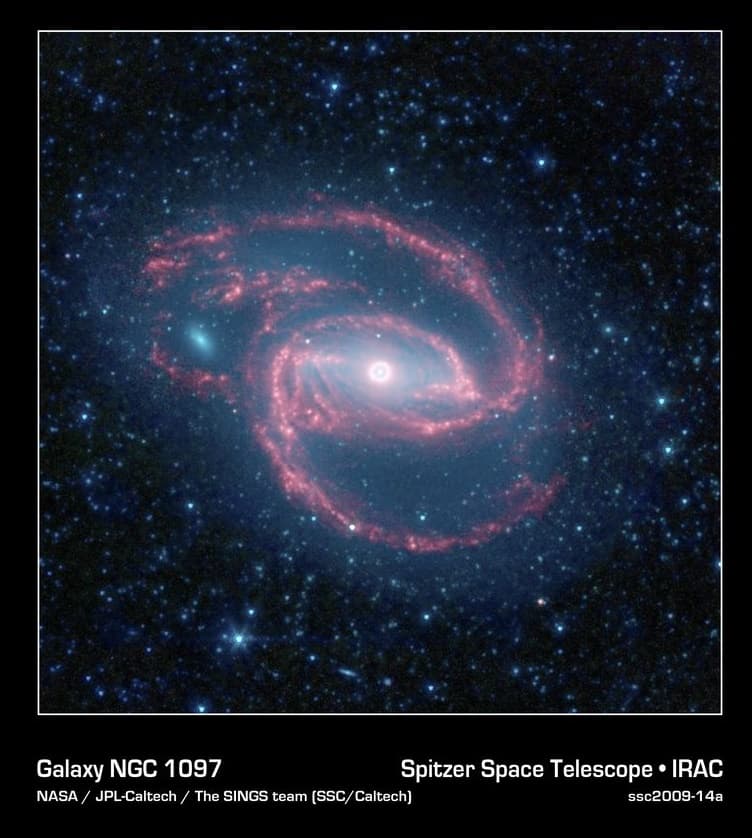 Rarely does a galaxy defy explanation, but if any qualifies, it's this one. As NASA puts it, this object is a "wild creature of the dark — a coiled galaxy with an eye-like object at its center." Dubbed NGC 1097, the galaxy can be found about 50 million light-years away from Earth in the constellation of Fornax.

Technically speaking, NGC 1097 is a spiral galaxy, with "long, spindly arms of stars." The overall shape this huge collection of stars take perfectly compliments the "eye-like" structure situated directly within the galaxy's central core.  Unsurprisingly this eye is actually a place inhabited by an unfathomably large supermassive black hole (not surprising since most large galaxies have one).This particular black hole can only be described as super, super massive, containing the combined mass of 100 million Suns.

In this color-coded Spitzer-taken image,the black hole's immediate environment is pictured in light blue. The emissions come from the black hole munching down on gas, dust, and, on a lucky day, stars and planets with the misfortune of wandering too close. It does have plenty of stars to choose from, as they form a huge ring (pictured in white), bustling with light from newborn nuclear furnaces.

"The galaxy's red spiral arms and the swirling spokes seen between the arms show dust heated by newborn stars. Older populations of stars scattered through the galaxy are blue. The fuzzy blue dot to the left, which appears to fit snuggly between the arms, is a companion galaxy. Astronomers say it is unclear whether this companion poked a hole in the larger galaxy, or just happens to be aligned in a gap in the arms. Other dots in the picture are either nearby stars in our galaxy, or distant galaxies," according to NASA.