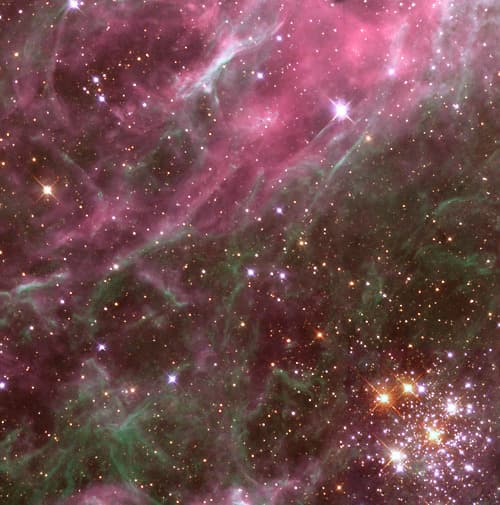 What you are viewing is one of the most vivacious star-forming regions found in our neck of the woods.

Called "Hodge 301," this beautiful, active region can be found within the confines of the Tarantula nebula, another large star-forming region found within the Milky Way's closest neighbor; the Large Magellanic Cloud.

The region itself is home to a number of incredibly hot, massive stars, but it also contains many stars that have reached the final stage of their cosmic lifespans, with ,many of them having already exploded as supernovae in the not-so-distant past.

Once the supernovae triggered, they catapulted huge shock-waves into the interstellar medium, where they proceeded to carve out and shape the surrounding region by corroding its gas content  Said corrosion led to the formation of the brilliantly beautiful filaments of material pictured on the right

Moreover, the region also contains many dark globules near the center, where ongoing star-formation is taking place, away from prying eyes.