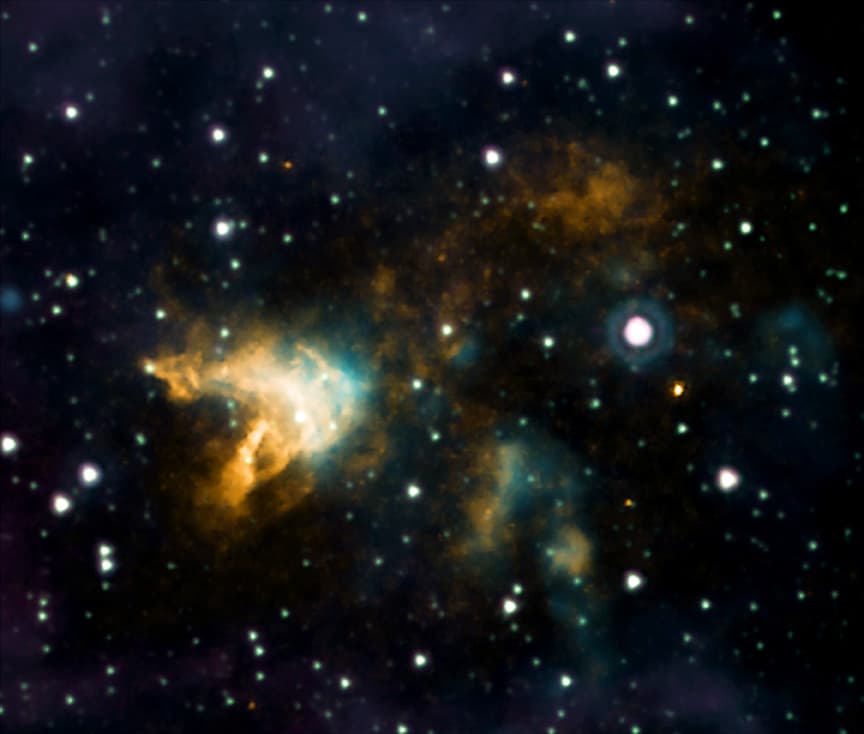 By dissecting the aftermath of a supernova, astronomers can gather a rather large amount of information about the star from which the supernova sprang. The remnant pictured here, known as G350.1-0.3, can be found approximately 14,700 light-years from Earth toward the center of the Milky Way (in the Scorpius constellation).

This image was compiled using data collected by the Chandra X-Ray Observatory (gold) and the ESA's XMM-Newton Telescope (infrared data was gathered by Spitzer, seen in light blue). The region's x-ray emissions seem to indicate that within the nebula's center lies a dense. compact object no larger than a few kilometers/miles across, most likely a neutron star. Also, based on its position relative to the x-ray emission, it appears as if the central star received a kick during the initial explosion itself.

This information can also help astronomers identify when the supernova ignited. The estimates range between 600 and 1,200 years ago. Moreover, this timetable, paired with the probable location of the progenitor star, suggests the star is extremely fast-moving, traveling at more than 3 million miles  (4.8 million kilometers) per hour, which makes it one of the speediest neutron stars in existence (that we are aware of, at least). Another recent APotD, called Puppis A, also ranks near the top.

NASA notes that "The age of 600-1,200 years puts the explosion that created G350.1-0.3 in the same time frame as other famous supernovas that formed the Crab and SN 1006 supernova remnants. However, it is unlikely that anyone on Earth would have seen the explosion because of the obscuring gas and dust that lies along our line of sight to the remnant."