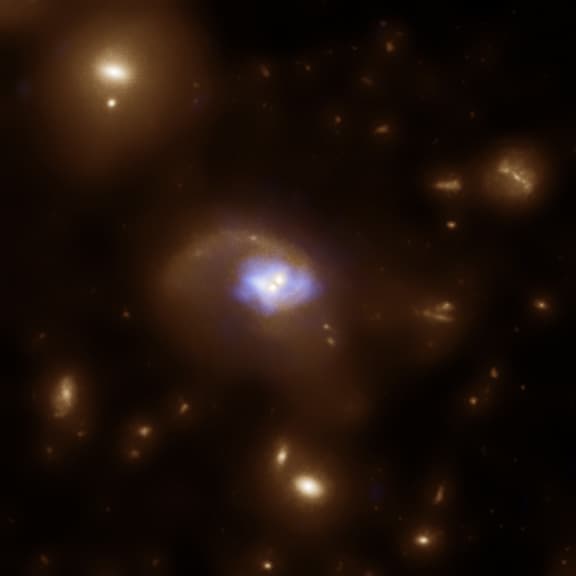 CID-42, which can be found approximately 3.9 billion light-years from Earth in the constellation of Sextans, is a bit of a cosmological conundrum.

Because of several strange qualities, astronomers posit that CID-42 may lurk within the confines of a triple black hole system. At some point in the system's past, the primary black hole was violently hurtled from its original position, similar to the kickback one experiences after firing a gun. Another hypothesis suggests that it was propelled by gravitational waves, which propagated outward after the binary black holes merged several millions of years ago.

This image is a composite, compiled using data from the Hubble Space Telescope, the Chandra X-Ray Observatory, and XMM-Newton. A few other ground-based observatories were involved in the compilation of the Cosmic Evolution Survey (COSMOS), which looks at the universe through the lens of its x-ray emission. As of 2010, COSMOS has archived well over 2,600 x-ray sources, CID-42 is just one of them.