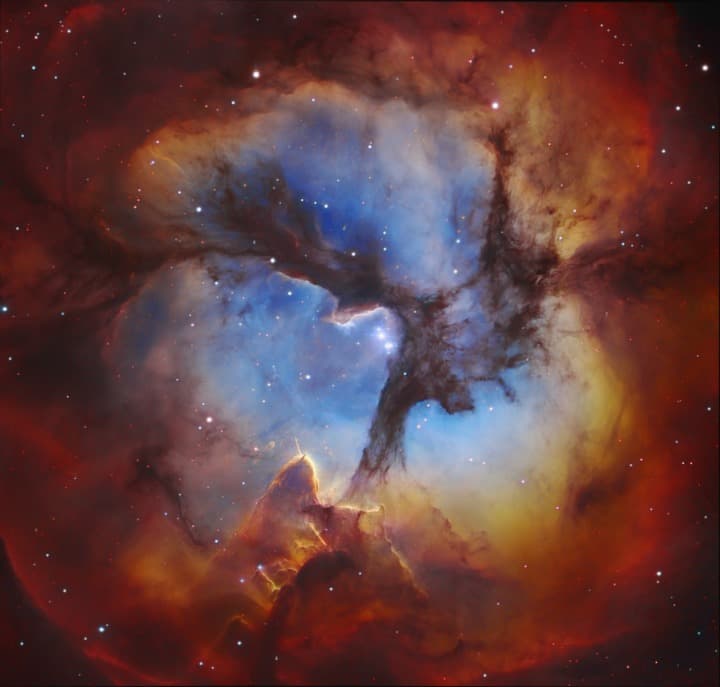 Partially because of its size and intensity, the Trifid Nebula is one of the most famous targets in the sky. The other reason is quite clear: it is simply stunning. Otherwise known as Messier 20 (M20) (NGC 6514 also works), the Trifid Nebula can be found around 9,000 light-years from Earth toward the constellation of Sagittarius.

The nebula itself is classified as a star-forming region, which means it presents us with a window into the earliest stages of star-formation—starting with the embryonic stage, leading up to the moment the star flickers on for the very first time.

As they coalesce and ultimately come to life, they have a dynamic impact on their surroundings. The most noticeable change star-forming regions undergo is called ionization, and it is responsible for the glowing clouds of gas present in Trifid. Solar winds, which help disperse ionizing radiation, also sculpt the dark pillars of dust—each spanning approximately 40 light-years across (one light-year is equal to 5.88 trillion miles)—that provide contrast.

Another noteworthy thing about the Trifid Nebula is its age. Astronomers estimate it to be just 300,000 years old—making it one of the youngest stellar nurseries in our galaxy. (See a larger image here)