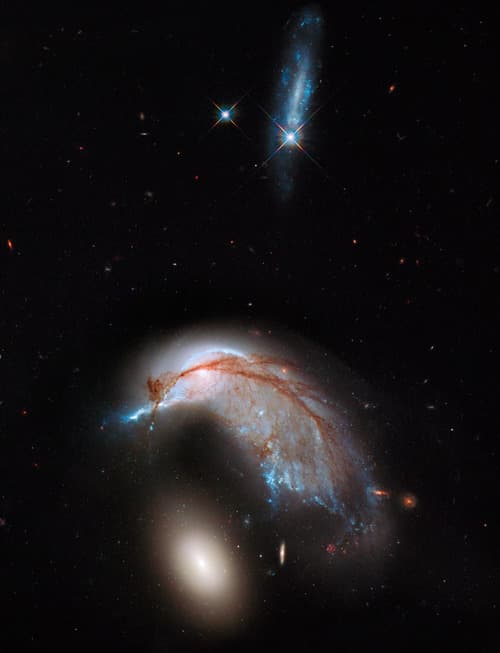 This pair of gravitationally interacting galaxies, known as Arp 142, is located some 326 million light-years from Earth in the southern constellation of Hydra.

The galaxy located in the upper portion of the pair is a spiral galaxy, known separately as NGC 2936. While NGC 2937, the galaxy located in the lower left of the image, is an elliptical galaxy. As you can clearly see, the gravitational perturbations have caused the gas and dust formations to scatter about, twisting them into tidal tails of material.

Throughout the interactions between these galaxies, the tidal material collects and eventually compresses, kick starting a new era of star formation. This is what we call "starbursts." These generally occur as a result of galactic mergers. Our own galaxy, the Milky Way, has experienced several starbursts over the course of its lifetime, mainly due to the absorption of dwarf-galaxies in orbit around it. And in about 5 billion years, this may occur again, when the Andromeda galaxy collides with our own.

In addition to the tidal tails, the prominent blueish knots in NGC 2936 are indicative of star formation activity. Strangely enough, its companion NGC 2937, contains little evidence of such activity. Instead, the bulk of the stars have a reddish hue, which tells us that most of the stars are older and the merger is having little effect on it thus far. It clearly had a large impact on its partner, as seen with the misplaced location of the nucleus and galactic disk.

Also seen here, in the upper portion of the image, is UGH 5120. This galaxy is unrelated to the two primary galaxies. Its actually located closer to us to, coming in at a distance of about 230 million light-years.