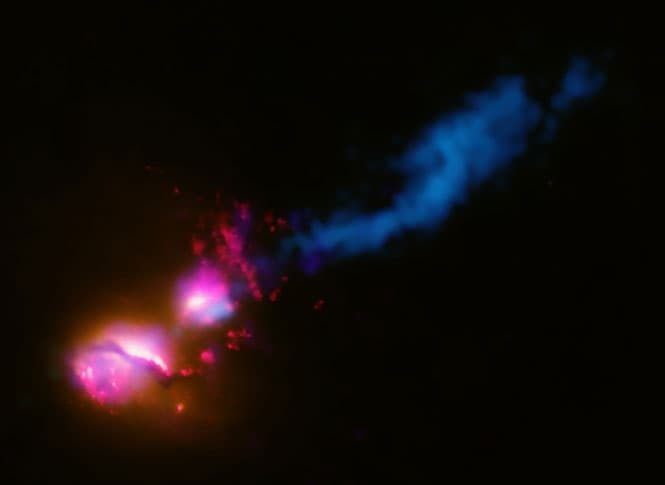 Since astronomers first uncovered evidence of previously-predicted black holes, they have seen that it's incredibly difficult to spot them out. Generally, we rely on how they interact with their surroundings to find potential candidates  (plus, scouring the sky for their x-ray emissions can help too). Only sometimes, things are much more simplistic, the region below is an example of one of those rare instances.

Here, we see the plumes of superheated gas streaming from the central region of a distant galaxy, known as 3C321. It is sometimes called the death star galaxy, given the damage the black hole's high-energy radiation will inflict on its parent galaxy and the things that remain tucked away inside its borders (it might prove most deadly for any inhabitants living on extrasolar worlds, as this radiation could strip a planet of its atmosphere with ease, or render the planet uninhabitable).

The image itself a a composite. X-ray data came from Chandra (seen in purple), optical and ultraviolet (UV) data was collected by Hubble (seen in red and orange), with radio data courtesy of the NRAO's Very Large Array (VLA) and MERLIN (both seen in blue). Together, this multi-wavelength data gives us a clear picture of how this supermassive black hole is impacting its parent galaxy (along with its companion, seen in the upper-right)

3C321 can be found more than 1.4 billion light-years from Earth in the Serpens constellation. Download a larger image here.