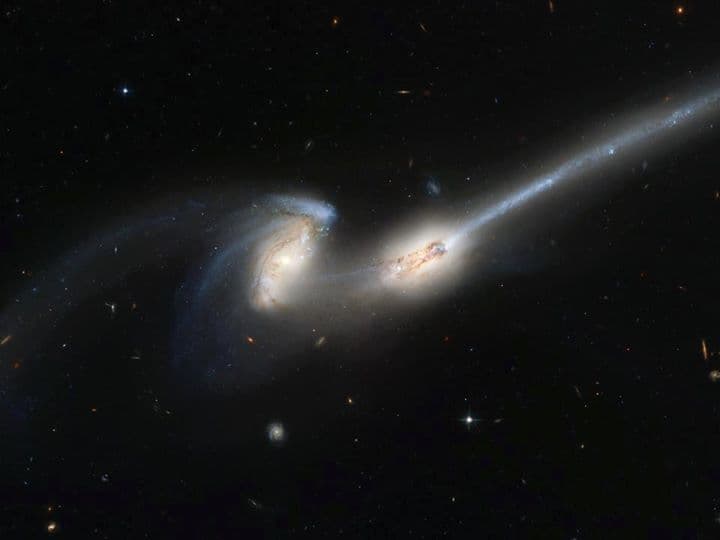 Located approximately 300 million light-years from Earth in the constellation of Coma Berenices, NGC 4676 is the picture of the perfection offered up when two galaxies collide, leaving behind two wispy tails of materials (born of gravitational pulls) in its wake. It's because of this galactic collision that this celestial feat received its nickname of "The Mice," as it resembles two mice running about in a game of cat and mouse. (Well, how about "mouse and mouse" instead?)

Both galaxies, which are still in the process of merging into a single, larger galaxy, are likely both members of the Coma Cluster of Galaxies. Of which, is one of the densest clusters of galaxies currently discovered. Interestingly, most of the galaxies located in the Coma Cluster are elliptical galaxies, while most galaxies located elsewhere have been discovered to be spiral galaxies.

Also pictured here in the light blue areas are millions of baby stars being born of the materials ejected during the collision. Astronomers have estimated that we are seeing the galaxies as they appeared about 160 million years after their closest encounter, which will continue indefinitely until the tails fall back into the new elliptical galaxy that will remain.