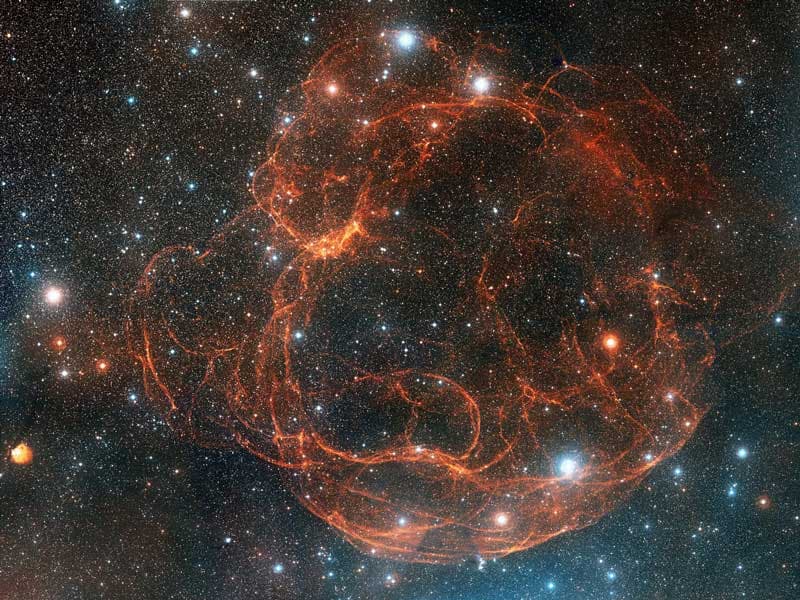 This bizarre celestial object is Simeis 147, the last remaining filaments of a supernova blast that reached our planet about 100,000 years ago. (Or its light, to be more specific)

Located in the constellation of Taurus about 3,000 light-year from Earth, Simeis 147 (also known as S147 or Sh2-240) is one of the most faint supernovae remnants discovered, and it covers a full 3 degrees of our night sky (or about 6 full moons). In comparison, this image covers the surface area of approximately 70 full moons!

Since the massive star responsible for the formation of this remnant collapsed, enriching the area with a myriad of heavy elements that can only be forged in the core of massive stars, the shell left behind has continued to expand. In fact, it spans an estimated distance of at least 150 light-years. Eventually, after several millions of years, it will disperse evenly...and the only thing left behind to indicate it ever existed at all will be a small (albeit dense) husk of a dead star (called a neutron star). However, it's possible that the cloud of gas will collapse, giving birth to new stars. These new stars will live and then die. Ahh, the circle of star formation!