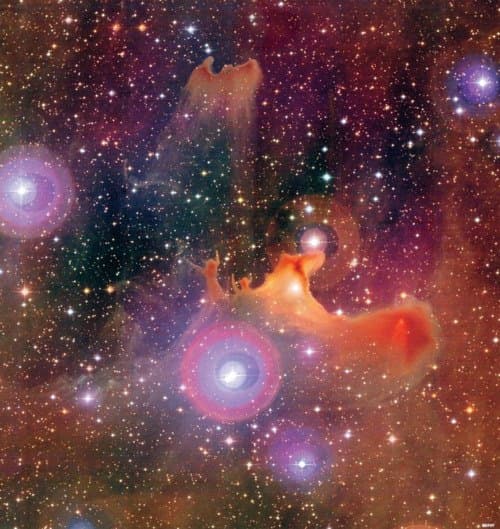 SH2 136 is better suited for the early fall instead of the start of winter, but it sure is a lovely sight, isn't it? Usually, when it is seen in subdued colors, it is perhaps a bit more spooky (little ghosts appear to rise up from the main nebula), but this image (taken by the Canada-France-Hawaii Telescope) brings new life to this stellar star-forming region (it lies about 1,200 light-years from Earth in the royal constellation of Cepheus).

You can also see regions that are entirely opaque to visible light from the background stars. These regions consist of dense and very cold clouds of gas, molecular hydrogen, and dust. Bok globule, as they are called (named after Dr. Bart Jan Bok), are star forming regions -- typically containing less than 100 solar-masses of material. The stars buried within the bok globule are protected from having their hydrogen envelopes stripped by the stellar winds of nearby companions.They will emerge from their stellar cocoons once the stars progress enough to develop their own stellar winds to evaporate the globule.

Other than its formal classification, this celestial region is also known as vdB 141, 'the Ghost' or the 'Ghostly Nebula.' It is part reflection and part dark nebulae.