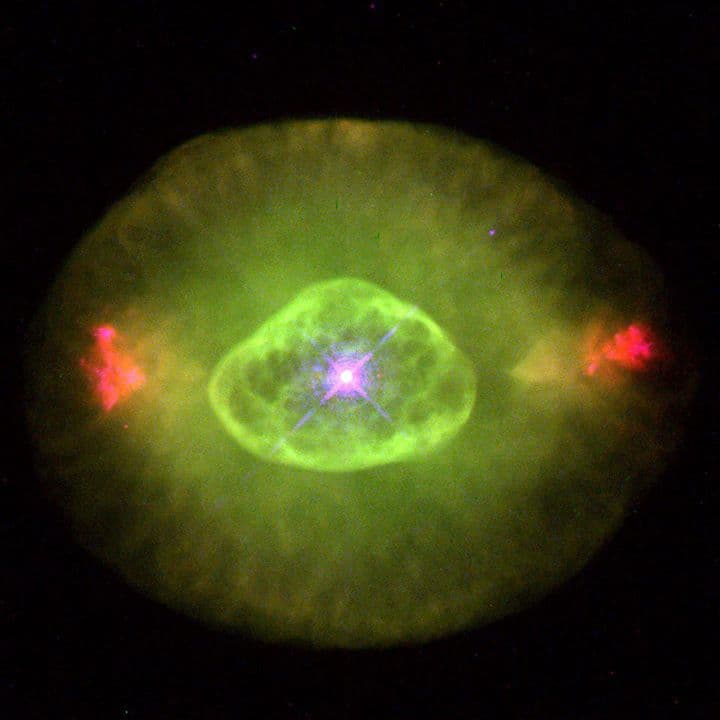 This spectacular region is Caldwell 15 (also known as NGC 6826); a planetary nebula found in the constellation of Cygnus. Like most other nebulae classified as planetary nebulae, this celestial object is a remnant of a sun-like star. Following the transition from main-sequence mode, the star rapidly grew in size, before it lost most of its outer layer of materials to space, leaving a white dwarf behind. The white dwarf can be seen front and center; making up the 'eye' of the nebula. Its negligible size is made up for in sheer influence, as this tiny dot has the power to shape the entire region. Its fierce stellar winds have subsequently carved out a massive cavity within the nebula itself, while pushing the older material away from the center, thus creating the glowing rim seen here.

The red features on both sides are called FLIERs, or Fast-Low Ionization Emission Region. There is speculation as to whether the FLIERs are moving or stationary. Either way, the combined optical attributes make for a beautiful nebula that almost everyone with a telescope and camera set up can see.

NGC 6826 can be found roughly 2,200 light years from Earth, where it shines with an apparent magnitude of 8.8. This would essentially make the star one of the brightest ones found powering a nebula of this designation. It's so bright, in fact, that when viewed through a telescope, the star overpowers the surrounding region. As such, it''s commonly referred as the "Blinking Planetary."