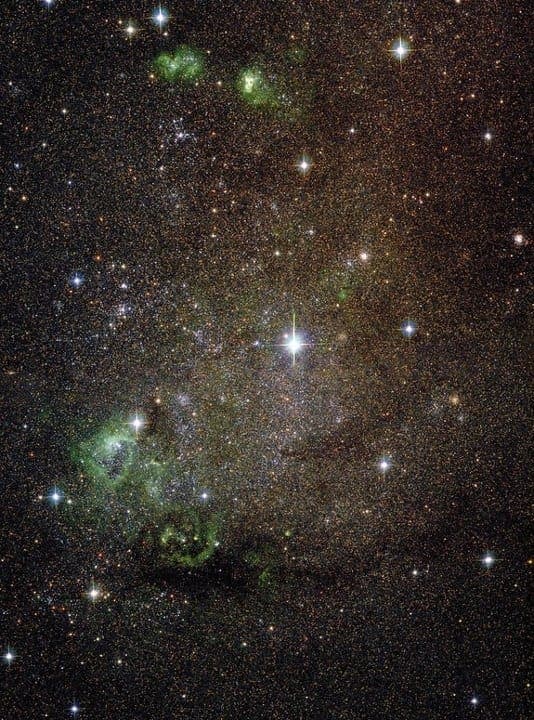 Lurking about 2.3 million light-years Earth, within the boundaries of the northern constellation of Cassiopeia, lies IC 10, an irregular dwarf-galaxy where thousands of baby stars are being born on a regular basis. Most of the light from these newborn stars is being obstructed by the intervening pockets of dust found near the plane of the Milky Way (which obstructs our view), but the reddish glow gives astronomers the position of said star-forming regions.

The galaxy itself spans a mere 5,000 light-years across and is a member of our local group of galaxies, which consist of more than 54 galaxies (including our own Milky Way and Andromeda). Interestingly enough, it is the only known starburst galaxy in our local group and it contains more large, unstable Wolf-Rayet stars per square kiloparsec than both the LMC (Large Magellanic Cloud) and the SMC (Small Magellanic Cloud) combined.

Furthermore, IC 10 and galaxies of this type are of the utmost interest to astronomers, as the stars contained within them have particularly low quantities of certain elements (such as nitrogen, oxygen and various other heavy elements) than those seen in the larger, more modern galaxies. Therefore, these stars act as fossils that preserve the universe as it was when it was much younger (and thus, in more pristine condition).

Wonder how galaxies are classified? Check out our article; "Galaxy Classifications: From Dwarfs to Spirals and Beyond"