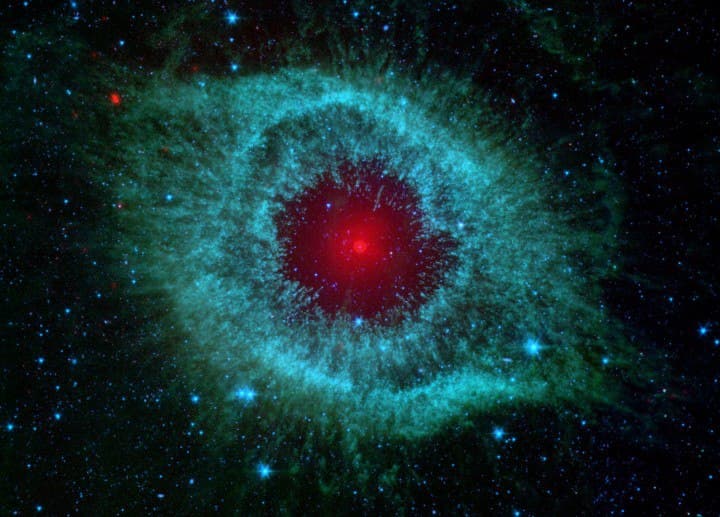 In this stunning photograph, the Spitzer Space Telescope shows the infrared radiation being emitted from the peculiar nebula resembling a cosmic eye - called the Helix Nebula (or NGC 7293).

For a long time, the glowing shroud of dust and gas - which orbits a central white dwarf and is two light-years across - was considered an excellent example of a planetary nebula--a visual reminder of the volatile final years in a sun-like star's life. However, the Spitzer data shows the nebula's central star is immersed in a surprisingly bright infrared glow. Models suggest the glow is produced by a dust debris disk. Even though the nebular material was ejected from the star many thousands of years ago, the bright glow of the close-in dust could be a byproduct of collisions taking place within a section of space analogous to our own solar system's Kuiper Belt or Oort cloud.

The Helix nebula can be found wandering about the cosmos some 700 light-years from Earth in the constellation Aquarius. Since it has a two light-year diameter, I think we can all agree that this peering beast would put the NSA to shame.