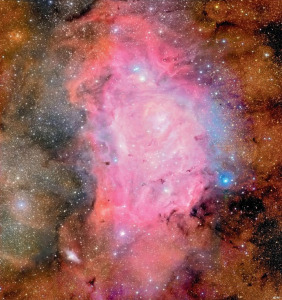 This A-B-S-O-L-U-T-E-L-Y stunning celestial region is the Lagoon nebula (also known as Messier 8), which is depicted in this newly released image, captured by the Canada–France–Hawaii Telescope from Mauna Kea in Hawaii.

The Lagoon nebula stretches more than 100 light-years across in our night sky, some 4,000 light-years away from our solar system embedded in the disk of the Milky Way. The prominent pink areas are emission of ionized hydrogen atoms, created by ultraviolet radiation streaming from massive blue-white newborn stars at the heart of the cluster.