All About Jupiter: From Its Great Red Spot to Its 67 Moons 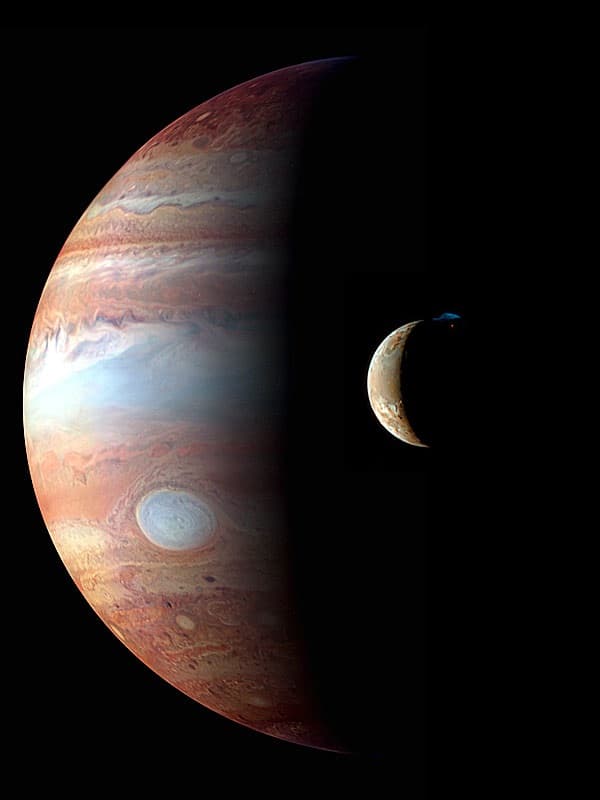 After passing the terrestrial body known as Mars, and heading passed the main asteroid belt, we arrive at a new class of celestial objects. This is the portion of the solar system ruled by the gaseous planets. The first of these planets is certainly not to be trifled with. The fifth planet in our Solar System is known as Jupiter. In mythology, Jupiter is the King of the Gods, likewise, in reality, Jupiter is the king of the planets. This giant is two and a half times more massive than the combined mass of all the other planets in the Solar System.

Orbiting at an average distance of 5.2 Astronomical Units (483 million mi or 778 million km), it takes 11 Earth-years for Jupiter to make one lap around the Sun. Jupiter also forms a 5:2 orbital resonance with Saturn (which means that, for every five orbits Jupiter makes around the Sun, Saturn orbits twice).

Jupiter also comes in as the fastest rotating planet in our neighborhood, with a Jovian day lasting less than 10 hours. Because of this, Jupiter has an equatorial bulge that can be seen from Earth – even with an amateur telescopes. Jupiter is also the fourth brightest object in Earth’s sky (preceded by the Sun, the Moon, and Venus, in that order). However, from time to time, depending on its position in relation to Earth, Mars may appear brighter.

Life on Earth may even owe its very existence to our massive friend. Not only does Jupiter’s mass keep a large number of passing asteroids out of the inner solar system (which could wreak havoc on Earth), Jupiter may also have been responsible for a period in Earth’s early history known as the "Late Heavy Bombardment." Ironically enough, this is when the gas giants conspired against the terrestrial planets by bombarding the inner solar system with icy comets; however, these comets that may have been instrumental in the development of life on our planet.

Jupiter is also home to a faint ring system and at least 67 moons. The four largest moons, Io, Europa, Ganymede, and Callisto, are also known as the Galilean moons—named after Galileo, who discovered them. Europa is one of the most interesting moons in our Solar System and is the smallest of the Galilean moons (Europa is also slightly smaller than Earth’s moon). Europa contains a subsurface ocean and, among the bodies in our Solar System, holds one of the greatest chances of supporting extraterrestrial life.

Then, of course, there is the Great Red Spot. The Great Red Spot is roughly 12,400 miles long and 7,500 miles wide (20,000 km by 12,000 km). So saying that you’ll be blown away by this storm is an understatement of epic proportions. Our entire planet would be blown away. Even at its smallest, this storm could easily swallow two to three Earths. And the clouds stink. Although most of the planet is composed of hydrogen and helium, Jupiter has clouds of frozen ammonia, some over 9 miles thick (15km). Ammonia gives off a rather pungent smell (similar to drying urine), so you might want to plug your nose. In fact, definitely plug your nose, because the ammonia levels are high enough to eat away your lungs. Of course, it will eat away your skin as well…and it will make you go blind.

To date, several probes have gone to Jupiter, including Galileo, the Voyagers, and Pioneer 11. In more recent news, the Juno spacecraft is expected to rendezvous with the planet in 2016. Jupiter is certainly one of the most fascinating planets in the Solar system and one of the most studied. Yet, I have a feeling, as we learn more about it, the fourth classical planet will continue to excite the human imagination and encourage our curiosity as we look up and marvel at it’s beauty.