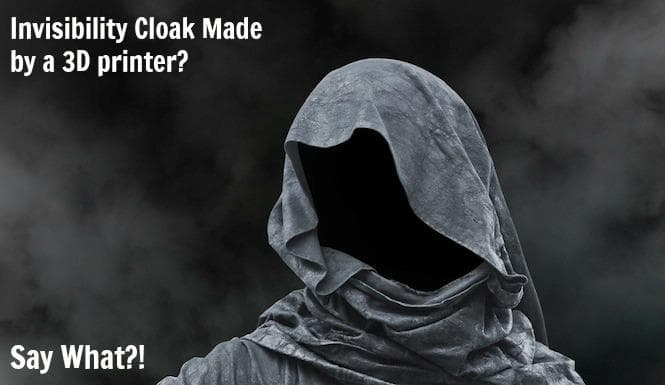 Science has made leaps with 3D printing, perhaps one of the most astounding technological advances in recent years. As we've seen, scientists have been able to develop functioning organs, bones and tissue using a person's own stem cells, prosthetic limbs, 3D printed guns that can withstand the force of firing a bullet and cars (among many other things). Hell, 3D printers can even print other 3D printers, which could have some cool implications for using the technology to build the first human base on the moon or Mars. The sky is the limit.

In recent news, a team of researchers have combined two awesome technologies into an exceptionally exciting product: an invisibility cloak created by a 3D printer -- the very first of its kind. (Harry Potter, anyone?) The team, who hail from Duke University, released the first prototype more than seven years ago, with the newest design unveiled several months ago, which looks rather unimpressive (particularly, it looks like a Frisbee composed of Swiss cheese) on the surface.

So, how does it work? It's actually kind of simple. Algorithms are used to determine the size, location and shape of the holes in the polymer circular-Frisbee design, which is open in the center, needed to deflect microwave beams (the only thing that can be deflected by this particular proto-type). An opaque object is placed in the center, after which, microwave beams are aimed and ejected at the device from the side of the disk, cloaking the object in the center, making it disappear from sight. Ultimately, "the microwaves are re-radiated back into free space on the shadow side of the cloak."

'The design of the cloak eliminates the 'shadow' that would be cast, and suppresses the scattering from the object that would be expected,' said Urzhumov, one of the leaders from Duke. He is hopefully, that in the-not-so-distant future, that a prototype will be developed that will cloak an object at optical and infrared wavelengths, using transparent polymers or glass. In addition, he believes that the same technique could lead to larger cloaking devices. Perhaps eventually, a cloak similar to the one used in the Harry Potter movies will be functional.